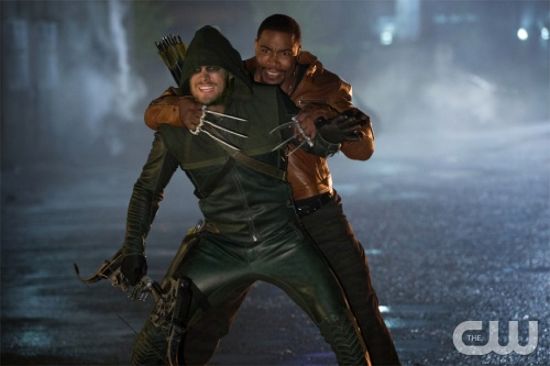 The CW has released a sneak preview clip from tonight's episode of Arrow, which is entitled "Identity." In "Identity," DC Comics characters Bronze Tiger and China White appear to wreak havoc. Oliver (Stephen Amell) finds out the medicine that is being sent to Glades Memorial is being hijacked by thieves.  Without an influx of supplies, the hospital will close.  Roy (Colton Haynes) attempts to stop the thieves, but he fails and is arrested by Officer Lance (Paul Blackthorne).  Oliver gets into a heated battle with China White (guest star Kelly Hu) and her new partner, Ben Turner, AKA the Bronze Tiger (guest star Michael Jai White), over the supplies.  Meanwhile, Laurel (Katie Cassidy) makes plans to catch the Arrow, and Thea (Willa Holland) gives Roy an ultimatum. The "Identity" episode of Arrow is directed by Nick Copus and written by Ben Sokolowski & Beth Schwartz. "Identity" airs on Wednesday, October 16, 2013 at 8 PM ET on The CW.