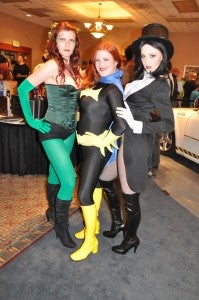 Our friends at the Suicide Girls blog, including their editor Nicole Powers and ComicBook.com contributor A.J. Focht, sent along a second batch of photos from this weekend's Aurora Rise fundraiser, organized to benefit victims of the Aurora, Colorado theater shooting. They raised around $20,000.

Since the shooting took place during a screening of Christopher Nolan's Batman finale The Dark Knight Rises, the comics community has come together to support the victims and remind the public at large that it's not the comics community but the actions of a lone criminal that led to the tragedy. Artists like Hellboy's Mike Mignola, Marvel superstar Matt Fraction and DC artist Moritat appeared in support of a silent auction that also sold off original art, signed comics and much more to benefit the families of shooting victims.

That the community reached out like this is a great thing to see. Check out the gallery below, featuring Syko Suicide!

My Hero Academia Hides WW2 Nods with Its Newest Villain