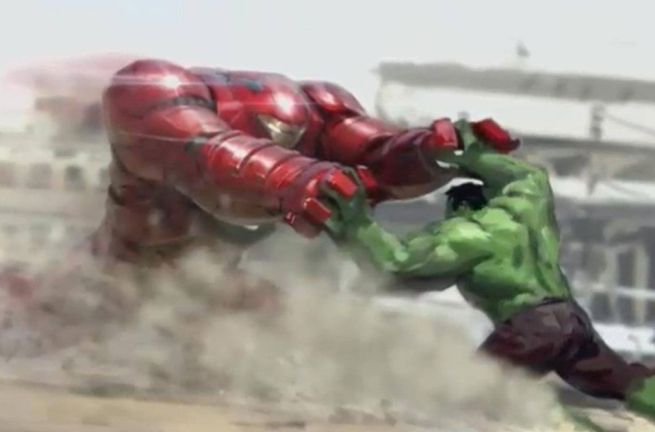 Age Of Ultron trailer opens with a party scene at Avengers tower. The Avengers are trying to lift Thor's hammer Mjolnir. Tony Stark is the first to try, but he can't do it, even using his Iron Man hand. Rhodey tries to help, but he fails as well. Hawkeye and Bruce Banner both try and meet the same failure. Steve Rogers seems to move it just a little bit, but not much.

Thor says, "You're all not worthy."

A noise catches their attention. Then, there's a first look at Ultron, who says, "There's only one path to peace. Your extinction."

There's a montage of various scenes, different places, explosions. Bruce Banner is in the woods. Tanks are fighting in the snow.

Tony Stark says, "It's the end. The end of the path I started us on."

Tony Stark is in the Hulkbuster armor, which he is using to fight the Hulk.

A fully-formed Ultron says, "Look no string on me."

Tony Stark is in what looks like a wasteland with all the Avengers lying, battered and beaten before him, even Captain America's shield is broken.

Macy's Thanksgiving Day Parade 2020: Where to Watch And Who Is Performing

Netflix's Assassin's Creed: Which Assassin Should the New Series Feature?