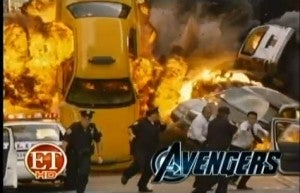 You know a movie is going to be big when people are hyping a preview of a trailer. Entertainment Tonight scored the big exclusive of being the first to show snippets from the full trailer which will be released tomorrow on iTunes. The preview of the Avengers movie preview was rather short, but what was shown did not disappoint.

The Entertainment Tonight preview started off with close-ups of various members of the Avengers. Snippets of action include Thor swinging his hammer, Iron Man chasing a missile, Captain America hitting a punching bag, the Quinjet about to crash, police running from exploding taxis, and a helicopter landing.