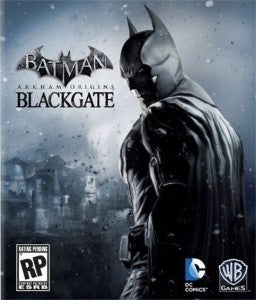 Warner Bros. Interactive Entertainment has just released a new gameplay trailer for Batman: Arkham Origins Blackgate entitled "New Management." The trailer shows off the art style and gameplay of the first Batman: Arkham handheld game as well as several of the villains Batman will tangle with in Blackgate Prison. Solomon Grundy is also revealed to be part of the game for the first time.

Developed by Armature Studio, Batman: Arkham Origins Blackgate brings the core Arkham pillars to a handheld format for the first time to Sony and Nintendo handheld systems. Featuring stealth gameplay, free-flow combat, and Batman¹s infamous gadgets, Batman: Arkham Origins Blackgate captures the genuine Arkham feel players have come to appreciate. A companion game to Batman: Arkham Origins, players can continue the storyline of the console version and discover more details of the Dark Knight's past. After gang-fueled uprisings occur within the walls of Blackgate Prison, Batman is called in to restore order and put an end to the rebellion before the chaos implodes. With gripping 2.5-D graphics, fully voiced narrative, and a captivating storyline, players will explore deep inside the bowels of this remote island penitentiary that plays an important role in the Arkham universe.

The Legend of Zelda: Breath of the Wild 2 Report Has Both Good and Bad News

Pokemon Cosplay Is Ready For Action With Sirfetch'd

Spiral: From the Book of Saw Rotten Tomatoes Score Is Out