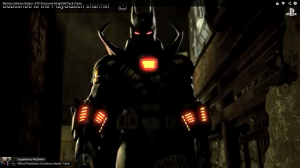 Yesterday, Sony revealed that PS3 users will be able to download an exclusive expansion for the forthcoming Batman: Arkham Origins game and play as the 1966 TV series Batman (as portrayed by actor Adam West) or as Knightfall/Knightquest Batman.

The Knightfall Batman skin will be Jean-Paul Valley's first full new costume, as seen in Batman #500 shortly after Bruce Wayne's back was broken in a fight with Bane. In it, he still had a more normal Batman cowl, as opposed to the two later iterations in which he had a blue and then a read armored helmet with visor.

You can check out the trailer for the Knightfall Pack below.