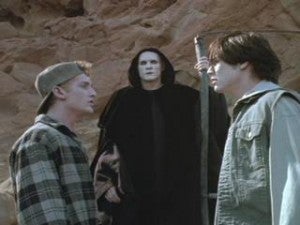 In an interview with Movieweb that ran late yesterday, character actor William Sadler told the site that he is likely to reprise his role as The Grim Reaper when a third installment of Keanu Reeves and Alex Winter's Bill & Ted franchise is made. Winter recently told the media that a script is completed and has his and Reeves' seals of approval.

"I know they're trying to write The Grim Reaper in," Sadler told Movieweb. "Alex said, 'How could we do this without the Reaper?'. I'm hopeful. I'd love to go back and play with those guys again. That was one of the most fun roles I've done. I'll be there in a heartbeat, if they want to do it."

[Spoilers if you haven't seen Bill & Ted's Bogus Journey] Sadler's version of the Grim Reaper was bested at a number of competitions by the slacker duo, affording them the opportunity to return to life and accept their destiny as mankind's saviors. The new film, though, picks up decades later and Bill and Ted still don't live in a world where "even the dirt is clean."

“When we last got together, part of it was that Bill and Ted were supposed to have written the song that saved the world, and it hasn’t happened,” Reeves told Sky News Australia when questioned about the film recently.