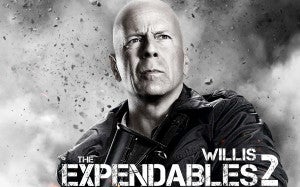 Bruce Willis left The Expendables 3 and was replaced by Harrison Ford after the actor refused to put in his four-day featured cameo for a $3 million payday, demanding an extra million to stay, a source close to the film told The Hollywood Reporter last night.

Producer Sylvester Stallone, who created the franchise, announced via Twitter earlier this week that Willis's character from the first two films would be replaced by someone played by Harrison Ford, effectively replacing Willis with one of only a handful of actors whose movies have made more money at the domestic box office than his own.

Moments after the announcement that Ford would fill the roster spot vacated by Willis, Stallone tweeted (without using names) that being "greedy and lazy" was a poor career decision, a criticism that seemed obviously aimed at Willis, but on which Stallone didn't elaborate.

As is wont to happen on someone's own, moderated social media account, most of the fans who tweeted back at Stallone were enthusiastic supporters--although there were a handful of people who thought he was being too harsh, including comic book icon Jimmy Palmiotti, who took time out of his busy schedule of writing about 30 comics at any given time and celebrating his new marriage to artist Amanda Conner to advise Stallone, "Dude, show some class."

"He said he'd drop out unless he got $4 million," THR's source said. "A million dollars a day. Stallone and everybody else involved said no. I think [Willis] was pretty surprised he was replaced in 72 hours by Harrison Ford— a better actor, a much nicer person and a more interesting direction for the film."

Representatives for Willis didn't comment on the story, and nobody is likely to talk about it officially unless it's so far from the truth Stallone or others feel obliged to clarify.