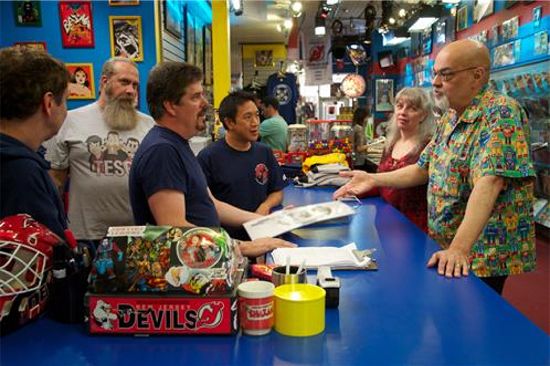 In the “Super Friends” episode of Comic Book Men, a customer comes into the Secret Stash looking for a Howard The Duck #1. Walt brings up that at one time Disney tried to sue Marvel because they thought Howard The Duck looked too much like Donald Duck. Kevin Smith points out how ironic it is that Disney now owns Marvel and Howard The Duck. The customer winds up buying the comic for $20.

Mike asks Walt what the value of a New Teen Titans Omnibus #1 is, and Walt says that he won’t find one for less that $175. Walt reveals that he lost $33,798 in comic books during Hurricane Sandy. Walt asks Mike what is the one thing he would have taken with him if he had known what was going to happen. Mike says it would have been his Teens Titans poster from 1984 that it was his favorite George Perez piece. 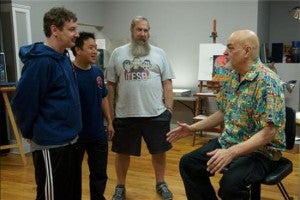 A seller brings a Rad Repeatin’ Tarzan action figure into the Secret Stash. The toy was pulled off the shelves because of a certain inappropriate motion that Tarzan does. The seller is asking $50 to $70 for the toy, but Ming only offers $10 for the toy. The seller refuses to sell the Tarzan for $10.

Walt and Bryan are talking to Robert Bruce about doing something special for Mike since he lost his collection in the storm. After Walt brings up that Mike likes Wonder Man, Robert reveals that he knows the artist George Perez and that he might be able to convince Perez to draw a Wonder Man for Mike.

A seller brings in a collection of Power Records Comics from the seventies to the Secret Stash. The seller asks $120 for the records, but Walt says because they aren’t in mint condition he could only offer $50. After some negotiation, the seller agrees to sell the records for $60. 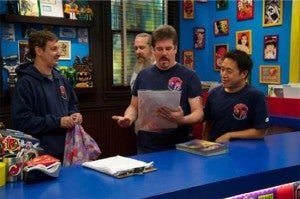 Walt, Ming, and Bryan go to meet George Perez. Walt tells Perez about how Mike lost his collection in Hurricane Sandy, and they ask Perez to do an original drawing of Wonder Man for Mike.

George Perez and his wife Carol show up at the Secret Stash and ask for Mike. Perez gives Mike a drawing of Wonder Man, and Mike is blown away by the gift. At the next podcast roundtable, Mike says, “You are super friends. You are, all three of you and Rob Bruce.”