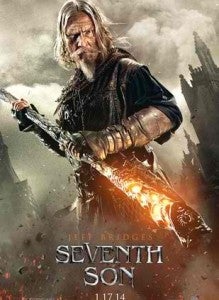 Warner Bros. Pictures and Legendary Pictures are almost done at San Diego Comic-Con 2013 presenting a slate that includes Godzilla, Seventh Son, 300: Rise of an Empire, Gravity, The LEGO Movie, Edge of Tomorrow and, in a surprise move, World of Warcraft.

In spite of our dodgy Internet connection here at the convention center, we're doing our best to get this up and out to you guys as fast as possible. You can check out our description of the Warcraft trailer here.

Jeff Bridges took the stage first, to introduce Seventh Son. The film screened a little footage--some battles and some creatures--and Bridges bantered back and forth a bit with moderator Chris Hardwick.

Director Sergei Bodrov, Kit Harrington, Ben Barnes and Anje Trau arrive, with Trau saying that doing this film right on the heels of Man of Steel was a very different experience.

Barnes reportedly plays a pig farmer with high ambitions, who is sold into servitude under Bridges's character. Eventually the two become allies ina  kind of fight aainst the forces of evil. Harrington is Bridges's apprentice, and apparently has been for a long time and is not treated well. Some comic fodder as well as some potential for serious drama, it seems. Harrington says that he originally took the job to work with Bridges.

Bridges says that all the action sequences made him feel younger, and that that's what acting is all abou. He praised the stunt coordinators and special effects people for helping it look good. Hardwick jokes (?) that the special effects guy is dating the actor's daughter.

The "mood piece" footage that they played for Godzilla this year is apparently the same as last year, according to Chris Hardwick, so we won't recap it here. 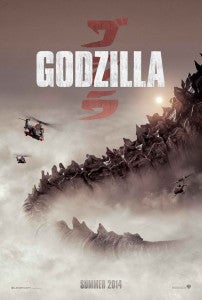 Director Gareth Edwards, Elizabeth Olsen, Aaron Taylor Johnson, and Bryan Cranston come to the stage, and Edwards says that the movie wrapped principal photography on Thursday. They had a night shoot, got on a plane and came to Comic-Con. He also says it's kind of surreal seeing all of the posters for other projects that his cast are in all over the city. He claims he had a lot of creative freedom from Legendary, more than anything he's done before.

Olsen told the audience that it wasd a very similar filming experience to other things she's done, which isn't what she expected by such a huge movie. Johnson says that's the director's involvement.

Cranston says that he's always loved Godzilla because as a kid he just wanted destruction. He didn't want to take the part at first because he didn't want to not do it right, and there are big shoes to fill, but ultimately he watched the director's first film and met with him and changed his mind.

Edwards says that when he came into the country from his native Canada and it came out during the Customs interview that he was going to direct Godzilla, the Customs Agent said "don't f--- it up." He also says that his movie is a real Toho film and that Toho accept it as part of the Godzilla legend.

Hardwick says that they have some stuff to show off as well.

Cranston stands up and pretends to take off his pants, saying that his pet name for "it" is Godzilla.

Legendary founder Thomas Tull comes to the stage to introduce Warcraft director Duncan Jones (whether it's called World of Warcraft or just "Warcraft," which is what the logo says, is unclear from different people talking and the reports that have leaked out this week).

The 300: Rise of an Empire presentation is Rodrigo Santoro, Eva Gree, Sullivan Stapleton and director Noam Murro. They say the story takes place around the same time as the first movie but is bigger in scope. Murro praises working with Zack Snyder, who directed the first movie.

Stapleton says that his character is trying to unite the Greeks against the invading Persians, and that the battles along the way are complementary to the story but not really the focus.

Santoro says that getting back into shape for the role was very hard.

They've finished shooting the film, but there's a lot of post-production work to be done still. Neverhteless, Murro says the film is looking good. I can't tell from the way he's talking whether the delay in the movie's release was because they needed more time for editing rather than a money thing like so may think.

He admits that there was a TON of green screen, but the actors interacted together and many of the sets and ships were fully constructed. He says he's trying to create a visual look for the movie that complements Snyder's from the first film without aping it or feeling derivative.

George Clooney didn't come out for Gravity, leaving Sandra Bullock to brave her first Comic-Con with only director Alfonso Cuarón and studio execs to help her. She says she wants to explore later.

She talks quite a lot about the technology of making the movie, including that she was at one point essentially trapped in a cube of LED lights and the whole thing would oscillate so that the camera was always on her no matter what she did or what crazy angle she was at. Sounds like that will make for a dizzying film and that the 3D could be interesting. She also says that both she and Clooney did the "vomit comet" even though she's scared of flying to prep for the movie. It was Clooney's idea.

As a grieving Xerxes, not yet looking fabulous, sits at his father's death bed, Artemisia (Eva Green) comforts him by telling him that only a god can avenge his father and defeat the Greeks--so he must become a god. he goes to a mystic cavern where he baptizes himself in a lake of enchantment and emerges as Xerxes the god king from 300.

The Lego Movie and its look were inspired by fan videos, so there's both CGI and stop motion but they don't want to  tell which is which.

They throw up some footage: like the teasers the other day it's a mix of animation and the live-action actors auditioning. All the characters and even the directors get their own mini-figs. Chris Pratt, Will Ferrell, Will Arnett, Elizabeth Banks, Liam Neeson and Morgan Freeman are in the video. Allison Brie, Nick Offerman and Charlie Day will be in it. Channing Tatum is Superman and Jonah Hill is Green Lantern. Cobie Smulders will be Wonder Woman--the first time she's been in a theatrical feature? And wasn't she Whedon's planned Wonder Woman?

Edge of Tomorrow, formerly known as All You Need is Kill, was the last bit of the panel. Tom Cruise showed up along with Emily Blunt, Doug Liman (director) and writer Christopher McQuarrie. Chris Hardwick and Tom Cruise have a heartfelt duet on stage that makes no sense to me. ("I Want to Know What Love Is")

Liman says that the script is "original" and "satisfying." Of course, it's based on a book that was pretty good. Blunt says that she had to work out like crazy for the part, that she and Cruise worked out together. Cruise says he always wanted to work with Liman.

"What I really want to do is entertain you all," says Cruise.