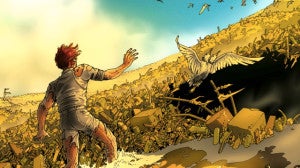 According to a post on his personal Facebook page, The Great Pacific and The X-Files Season Ten comic book writer Joe Harris is set to begin production on a film project.

One of his previous short films, 2001's Tooth Fairy (embedded below), was adapted by Revolution Studios into the movie Darkness Falls. The movie generated about $50 million worldwide and spawned a prequel comic, also written by Harris. Recently, Harris announced that his comic book Ghost Projekt was being adapted for TV.

"I'm gonna shoot a new film project soon," Harris wrote this morning. "Getting these plans together in the near future."

He followed it up with another link to one of his short films--this one called Witchwise, which is embedded at bottom--with comments that may suggest he's following that one up directly.

"This was the last short I wrote and directed, a horror movie called Witchwise," Harris wrote. "Hoping to follow this up very soon. I miss shooting, the collaboration, working with actors and FX... can't happen soon enough. Willing this next idea into existence."