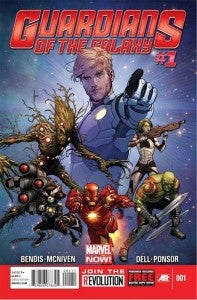 During a Marvel Panel at the New York Comic Con, a cover of the first issue of the Guardians of the Galaxy was shown with a new team member. The new team member happens to be Iron Man. While many people were left scratching their heads over Iron Man’s inclusion in the Guardians of the Galaxy comic book, it completely makes sense if you take it in the context of Joe Quesada’s earlier statement about synergy with the movie.

Obviously, Marvel Studios will want to work out a deal with Robert Downey Jr. for Avengers 2, but Marvel Studios also has a propensity for signing multi-picture deals with actors. While just speculation, one scenario that would certainly play out well for Disney is to sign at least a three picture deal with Robert Downey Jr. The star actor could be a member of Guardians of the Galaxy in 2014, a member of the Avengers 2 in 2015, and back in his own solo Iron Man 4 movie in 2016.

Now, it’s also possible that if a version of Iron Man appears in the Guardians of the Galaxy movie that it won’t be Tony Stark. In that scenario, Marvel Studios would still have the benefit of a recognizable character joining the group, but just not the star power of Robert Downey Jr.