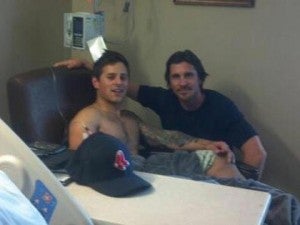 According to The Denver Post, Oscar winner Christian Bale is in Aurora, Colorado, visiting the victims of last week's theater shooting that took place during a screening of his new film The Dark Knight Rises.

The photo at left, posted to Twitter, is circulating on the Internet right now and shows Bale visiting shooting victim Carey Rottman in the hospital. He reportedly spent about ten minutes with each of seven patients at a local hospital, as well as a number of first responders.

Last week, a petition urging Bale to visit the victims in Colorado emerged online while he and the rest of the cast were in Europe; the star reportedly was able to make it out to the hospital as a result of a number of premieres cancelled by Warner Brothers, the studio distributing the film.

Contacted by the newspaper, Warner told them that Bale was there on his personal time in an unofficial capacity.

"Mr. Bale is there as himself, not representing Warner Brothers," said an assistant for Susan Fleishman, executive vice president for Warner Brothers corporate communications, according to the Denver Post. A representative for the hospital also said that the actor had asked the media not be notified, that he only wanted to meet with victims and law enforcement (although he reportedly spent some time with Colorado governor John Hickenlooper while he was in the city).

“Words cannot express the horror that I feel,” the actor in a statement earlier this week. "I cannot begin to truly understand the pain and grief of the victims and their loved ones, but my heart goes out to them."