It was an eventful last week of June for the Bat-books as two storylines wrapped up, leaving new questions that may not get answered for a while. Also, two more pieces to the "Flashpoint" puzzle were released into the wild. How are things shaping up in this altered timeline? [caption id="attachment_6464" align="alignright" width="150" caption="Detective Comics #878"] 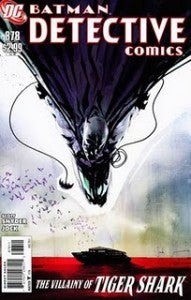 [/caption] Detective Comics #878 was written by Scott Snyder with art and cover by Jock, and was part three of the "Hungry City" storyline. Batman's investigation into the death of Evelyn Marr comes to a head as he starts the story off nearly being eaten by a killer whale. The new Tiger Shark is a decent new addition to the rogues gallery, and looks like he could be a thorn in Dick's side for a while. Unfortunately, that may not happen, as Dick is poised to return to the role of Nightwing come the relaunch of all of DC's titles. It's a shame, too, as Grayson has really taken the Batman mantle and ran with it this time to make it his own. I wouldn't want to be caught manipulating Batman for my own means, as he shows with harsh words that he does not appreciate it. The issue closes with a gruesome and surprising ending leaving the reader wondering where it goes from here. Snyder and Jock's issues have been great. The stories have kept me wanting more, and I'm glad Snyder will remain on board per DC's new relaunch. Jock's nuanced art keeps every scene unique, and his covers have been a real selling point for this last run on Detective. Definitely pick up this issue as well as their others. [caption id="attachment_6479" align="alignleft" width="194" caption="Gotham City Sirens #24"] 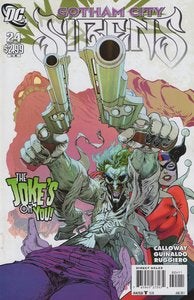 [/caption] Gotham City Sirens #24 was written by Peter Calloway with Andres Guinaldo on pencils and Guillem March on cover duty. The Arkham riot continues as Ivy tries to talk some sense into Harley Quinn. Harley keeps Ivy distracted, addressing the lingering tension between the two as Joker escapes, with Harley revealing her true allegiance. Meanwhile, Batman and Catwoman try to subdue the chaos. As the story ends, old wounds are re-opended and the series comes to a presumed close. The issue was action-packed, and it makes me sad to see this series go as I really just recently dived into it. The art was hit and miss throughout with the wide-shots leaving a little to be desired, but it did not stop me from enjoying the issue. Definitely pick up this one up, too. [caption id="attachment_6484" align="alignright" width="195" caption="Green Arrow Industries"] 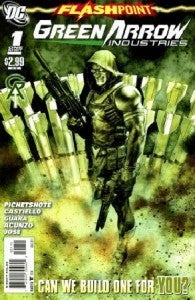 [/caption] The world of "Flashpoint" expanded with the release of the Green Arrow Industries one-shot that was written by Pornsak Pichetshote. Pencils were given double-duty and handled by Marco Castiello and Ig Guara. The cover was by Viktor Kalvachev. This version of Oliver Queen is a glorified Tony Stark. Green Arrow Industries uses a military team to capture supervillain-tech and repackage it for government use. A few pages in, things go south for Oliver Queen and Roy Harper. How exactly that happens isn't revealed. I don't know if it was just the issue I picked up or if it was the whole print run, but it seems like a page or two is completely missing. The rest of the issue is spent with Ollie playing a game of cat and mouse with a version of Vixen. All in all, the issue seems like filler just so we know what a couple of characters are up to. There's no weight behind the story. Oliver is portrayed as an opportunist and a coward, and while hints of a better back-story are dropped, I was never really concerned with what happened. The art wasn't bad, and keeps the action flowing. The cover is interesting as it conveys the image I'm sure Queen would want the world to have of his company, yet behind that veil, it's nothing near it. The "Flashpoint" one shots will almost surely all be collected together. This issue could be put on hold to read. [caption id="attachment_6485" align="alignleft" width="195" caption="Hal Jordan #1"] 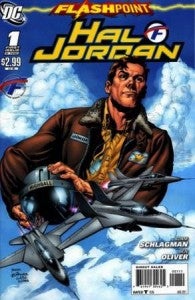 [/caption] In Hal Jordan #1, written by Adam Schlagman with art and cover by Ben Oliver and Rags Morales respectively, not a lot is different aside from the world itself. Hal's father still dies in a crash, and he still becomes a pilot. He is however, fired from Ferris Air, but due to the war between the Atlanteans and Amazons, he is drafted back into service by the government. Ferris Air patrols the coast, keeping the US safe. During a routine exercise, Carol and Hal are attacked by Shark, and Hal takes matters into his own hands. Abin Sur makes an appearance, and it veers off in a different direction than his usual story. Once again, another "Flashpoint" miniseries is lackluster. So far, Batman and Kid Flash are offering up the stories with the most potential with Aquaman and Wonder Woman not that far behind. Maybe the next issue will actually lead to there being some kind of point behind Hal's story. So far, this is a skip.