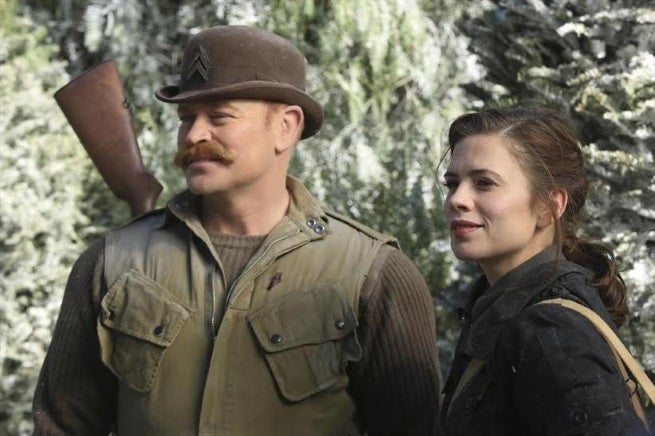 Neal McDonough makes his long awaited return to the Marvel Cinematic Universe as Dum Dum Dugan in tonight's episode of Agent Carter. We've seen Neal pop up in a few places since he debuted in Captain America, but he thinks this might be his best outing yet. ComicBook.com sat down with the actor, who's other work includes Justified & Flags Of Our Father, about suiting up one more time, wanting to mix it up with Nick Fury and so much more.

When you get that call and they say, "Hey Neal, it's time to suit up again," were you super excited to get back into the role of Dum Dum?

Neal: Oh, are you kidding me? Once in a while you get to play a character that's really kind of close to you, and Dum Dum's probably the closest to me, that gregarious, fun kind of character who just loves to mix it up and enjoy life to the fullest kind of character. My wife, always says that the closest character played to me is Dum Dum. So yeah, when they said come back and play Dum Dum again, I was so, so, so excited. Just to be back in the Marvel family is such a wonderful experience to be a part of.

Do you like playing in that time period of the 40s? Do you ever wish you could mix it up with some of the modern day guys or do you have an affinity for that time period?

Neal: Well, in the folklore when you look at the Dum Dum bible, he was head of S.H.I.E.L.D. at one point and then came back as a deputy for so, so long. Hopefully I would love to see if he could somehow come back to the Avengers or make it to the present day because I think that would be really neat. But I really like that period, the 40s period, from Band of Brothers, to this, and Flags of our Fathers, so many projects that I've done, the 40s, it's just a great feeling for me. A new series I'm doing on TNT Public Morals is the 60s. Which is also just as fun, but there's something really genuine and ... All-American about the 40s, and I enjoy tapping into that, and that generation has been written about so often. It was just a different group of guys, and gals too, for that matter. It just seemed they had less yet they were so much tougher, in a day now that we complain about so many things.

People complained so much less it seemed back then. My dad, he's 90 now. He didn't complain about squat. So you learn from those tough guys that life is short, but also life is really valuable. And while we're here, really live it to the fullest and be a good person and be a good human being ... And that's kind of what the 40s guys are, about Compton, the guy that I played in Band of Brothers, really taught me those lessons and stuck it in my head that, man up whenever you can. And that's what those guys did, and that's what they taught me, and so I like playing those 40s characters.

What was it like getting the band back together with the Howling Commandos? I know you're the only original showing up in the episode. Was it different at all?

Neal: When Kenny and I did the Agents of S.H.I.E.L.D. episode, we were the only 2 original from Captain America to show. So again with this one, they had recast the rest of the Howling Commandos, but the guys that they've cast are fantastic actors. And great, great guys. We had a blast. I love them both dearly, the new commandos and the old commandos.

What about being able to share the screen with Hayley again?

Neal: Hayley was terrific. I told Hayley, it was, we were there one day and we were doing this really long, long scene, this big action sequence, and she could've easily went back home and left for the night, but she stayed around for a few more hours doing, not even off-camera dialogue, she stood off-camera so I could have the right eye line for the shot. Actors don't generally do that, especially actors who are worked to the bone like she is, on the show, every shot she basically is. She cares so much about her craft and she's also a really good person, that it's great to see someone like that doing that. I said, "Season 4 you're still going to be doing this, I hope you are." Everybody laughed about it. She's terrific. She loves playing the character so much.

She's a great leader for all of us on the show. I think it's great to have a powerful woman lead. I like, in my life, my mom was a very powerful lady. My wife, Ruve, is also a very powerful lady. Those are the women that I aggravate towards, and Hayley's playing that character. It's great to have that type of woman on television. I think it's just wonderful for everyone to see that.

What is it about Dum Dum that you think makes him such a fan favorite amongst fans?

Neal: Dum Dum is one of those guys if you're going to get a fight you want Dum Dum on your side.

Neal: But also Dum Dum, if you want to go have some beers, you want to go drink beers with Dum Dum. In general, if you're doing both, it'll be a good time Dum Dum hanging around. But he's also, as you'll see next week, he's got a heart to him also, that he cares about his men and he cares about getting the job done. He'll die for the cause, and that's who he is. He lays his life on the line for what is best for America, and ... For me, I really love playing that character.

Would you ever be open to doing one of those one-shots solely focused on Dum Dum? Are you looking to explore him more as a character?

Neal: If Kevin or Lou ever asked me to sweep the floors at Marvel, I'd be there for that. Yes, if they ever asked me to do Dum Dum and anything, of course, I'll do it. Again, I love playing that guy. He's such a fun, larger-than-life character. He has such a huge fan base.

That it's such an honor for me that they chose me to play him. Kevin and Lou have been so great to me that if they ever asked me to do anything for Dum Dum, of course, I'll be there in a heart beat.

What do you think the first on-screen appearance would be like if you and Sam Jackson got the opportunity to share a scene?

Neal: I've been saying that if you put Nick Fury and Dum Dum in 1972 driving some sweet Lincoln Continental, or no, driving a really sweet Cadillac Fleetwood it would be amazing. Hopefully they get around to doing that because as much as I love to see Dum Dum, I would love to see Sam back in the 70s wheeling and dealing some pain on some guys who deserve it. I think that would just be so much fun to watch.

It sounds you're obviously a fan of the whole Marvel Cinematic Universe. Are there are any aspects of it outside of your character that are your favorite? What is about the Universe in particular?

Neal: Well, obviously my favorite now after doing so much research and playing him for the last several years, Dum Dum is without question my favorite. Everyone they have cast as all the other main characters, the casting has been just perfect. I can't imagine anyone else but Chris Evans playing Captain America.

I love the fact that, again, when it comes to Agent Carter that they're telling a story, and the lead character on television is this bad-ass woman in the 1940s. I think that is just awesome.

Looking ahead to next week's episode, is there an "Oh my God" moment that you can't wait for fans to react to?

Neal: The reveal for Dum Dum is pretty awesome. The way they orchestrated it is just I think the fans are going to go bonkers when they see Dum Dum coming out. I thought they were going to keep it completely unadvertised and then no one would know that Dum Dum was going to be in next week's episode, but I think that the secret is out, so ... I think they're just going to have a great time watching, and in a much signature walk who makes it in there. So yeah, for me, it was so much fun to just jump back in, put the bullet back on and let it rip. For Neal McDonough, it pretty easy to jump back into Dum Dum's clothes.

And then of course the Dum Dum spin-off.

Neal: I have 5 kids to feed. I need the Dum Dum spin-off.

We'll make sure we start the campaign for you.

Are you excited to see Dum Dum Dugan show up on Agent Carter? Let us know in the comments below.

EXCLUSIVE: Agent Carter's Neal McDonough On Dum Dum Dugan & Wanting To Mix It Up With The Avengers