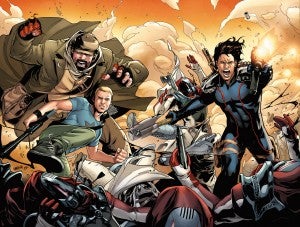 At Baltimore Comic-Con two the weekend before last, Valiant Entertainment announced that the classic Valiant character The Eternal Warrior--known to fans of Fred Van Lente's wonderful new series Archer & Armstrong as Gilead, the brother of Aram, also called Armstrong--would return in an upcoming issue of Archer & Armstrong. He's not just showing up, either--he's showing up wanting to kill his brother. "Armstrong and Gilad just do not see eye-to-eye. They're brothers, but their similarities end at genetics," Van Lente told USA Today about Archer & Armstrong#5."Gilad sees [immortality] as a duty to fight for right, Armstrong sees it as an opportunity to drink as much booze and spend as much time with as many beautiful ladies as he can — so this issue is mostly fists, minimal hugs. We'll see if they can work things out before the four-issue arc ends." And that's where the fun starts for Van Lente, who gets to write the kind of defective family dynamic he's known for making work so well during his run with Greg Pak on The Incredible Hercules. Van Lente spoke to ComicBook.com about bringing The Eternal Warrior into the 21st Century. Valiant seems to be pretty invested in creating a universe fairly quietly, aren't they? Rolling out Zephyr and Ninjak as supporting characters in other books spreads the fans a lot less thin than giving everybody their own title... 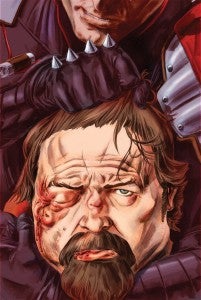 We just had our first writers' summit which was a lot of fun and there was a lot of back and forth and collaboration. The short answer is yeah, I think that Valiant's been very cautious and deliberate up to this point which I think is a good thing particiuarly given you're competing with Marvel and DC who are both doing these massive, line-wide relaunches. I don't think that Valiant's intention is to launch a lot of titles, although Shadowman is coming out in November. What made you decide that a character as big as Eternal Warrior "fit" in your book without making things too cramped? Archer & Armstrong is pretty natural becuase originally Archer & Armstrong was a part of a family of books--Eternal Warrior was pretty much launched right around the same time. The new Geomancer and the new Timewalker will also be showing up pretty soon. Plus, all three of the brothers did appear in the first three pages of the series, so we've already seen them. Obviously the introduction of Gilead to the modern day kind of puts Aram front and center, doesn't it? That's a change of pace, since this first arc has been pretty Archer-driven. Was that a purposeful change, or just the way things broke down? Definitely you'll see in [issue] four there's a changing of the guard in terms of story arcs. I'm biased but I think the hand-off is pretty natural. We've been very Archer-centric, in terms of battling is parents and I tweaked his origin to make him unequivocally part of the sect. Archer's whole world has been turned upside down since the events of #1 and by the time we get to #5 it might be turned upside down once or twice again. 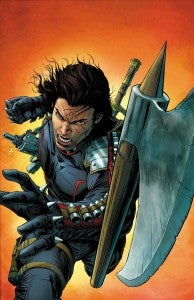 Gilead was--how should I say this--a pretty "extreme" character back in the '90s. Arguably one of the most definitive ones. How do you approach making a character like that work in today's market? If anything, this interpretation of Gilead is even more EXTREME than he was in the '90s. Gilead is out to kill Archer, so he's kind of this relentless protagonist. Jason Bourne meets the Highlander with al ittle Terminator thrown in as well. Once you get past the "I'm trying to kill you" aspect of the relationship, how do Aram and Gilead function together in your version of the series? I think it's definitely influenced by Hercules and Ares in my Incredible Herc series for Marvel. Gilead thinks Aram is wasting his life in hedonism and Aram thinks Gilead is wasting his in perpetual conflict. And so it's an unending series of uncomfortable Thanksgivings for these characters. In that case, how do you kind of separate those characters in your head so that you don't veer onto auto-pilot and start writing the other pair? Herc--this is maybe a fine distinction, but Herc was in Olympus from the moment he was born until Thor #120 or 124 or whatever it was. Herc, even though we didn't have him talk like he's from Shakespeare times, Herc was always kind of separated from pop culture. Armstrong has lived through all of modern cutlure--he had no Olympus to retreat to. He's a little more sophisticated than Herc is...and his alcoholism was more out of control than Herc's is!