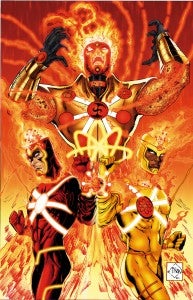 Firestorm has always been one of those characters that has been in just about every major superhero team that DC has, along with being one of the superheroes that keeps coming back in his own series no matter how many attempts he gets at a solo book. It should be no surprise then that here he is again as part of the DC relaunch. His power set is very strong, with his ability to manipulate matter, fly, fire energy and much more, he is probably one of the heavyweights of DC in terms of sheer ability, but he's never quite made it to the very forefront of the DCU, no matter how much exposure he has. Does Firestorm have a following? Absolutely. However, this first issue doesn't do too much to help propel him forward. It may actually do more to set the character back, as it relies on a clunky sub-plot about racial tensions to get itself jump started and doesn't do much from there.

The story opens with some disturbing violence, as a child, his mother, father and sister are all killed by a group of shadowy figures who are on the hunt for mysterious objects tied to an experiment by deceased scientist Dr. Martin Stein. We cut from their dealings with the child on the other side of the world to the United States and Walton Mills High School. It's home to white quarterback Ronnie Raymond and black school newspaper reporter Jason Rusch. I only mention the races of these characters because Gail Simone and Ethan Van Sciver seem obsessed with establishing racial tension in this book, even if it feels awkward for all the wrong reasons. Where is this school? What part of the country is it in? Even having that clue might help a little bit to make sense of it all, but we're given a generic high school with generic dialogue and generic characters who seem too quick to jump into issues of race that seem ancillary to the main story of the book.

While our two main, flat characters are arguing over Jason's profile of Ronnie for the school paper, the people seeking these objects of Dr. Stein's work have traced the last one to the school, where Jason just happens to have the last one in his locker (?). Yes, highly powered nuclear experiments are all the rage for back to school shopping this year, and Jason uses the device that contains what we learn are "god particles" to save the lives of everyone around him by saying "Firestorm". What emerges from the explosion are two figures with costumes and super powers, Ronnie and Jason to be exact. As they battle it out over the transformation, they end up merging into one massive figure at the end. Shocker, I know. The whole issue felt telegraphed from the start, as it was obvious these two opposites were going to end up teamed in some way. If Simone was trying to establish credible tension between the two young men who are now forced to share each other's lives as this new figure, there are better ways to do it than manufacturing phony racism. It honestly sticks out like a sore thumb and makes the middle part of the story awkward as it attempts to bridge the plot together. It felt like a very special episode of "Saved by the Bell" rather than a superhero book. Simone is a gifted writer and this is certainly not her best work. Grade: D

Fury of Firestorm #1 Review: Not Firing on All Cylinders