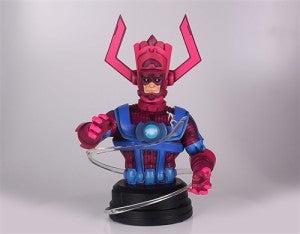 Warning: Spoilers ahead for today's comics. If you haven't read your pull list yet, skip the first two paragraphs below!

Little Giant Studios, makers of high-end action figures, statues and other collectibles, recently announced a San Diego Comic-Con International exclusive that, in light of this morning's senses-shattering Age of Ultron #10 reveal, will likely turn out to be pretty popular next month.

That's right, folks: Galactus. He's hungering for the Ultimate Universe, and now he can be on your desk, hungering for...I dunno, your staples or something.

Weighing in at $120, the Galactus bust is available for pre-order now for delivery after Comic-Con or, presumably, will be available at the Gentle Giant booth during the show.  You can also get a $10 discount if you pre-0rder it along with a War Machine bust, but that page is locked down for members only.

Swooping around him is Silver Surfer, who will also be featured in another new figure available for pre-order: a Marvel Select toy through Diamond.

Sculpted by Sam Greenwell based on his classic look, the Surfer stands approximately 7 inches tall and is due in stores this winter.

For a base, the Surfer comes with a rocky planetary surface, with his ever-present surfboard supported by a winding energy trail. The board is removable from the base, and the Surfer can stand on the base with it as well as ride it using his 16 points of articulation. Additional accessories will include energy blasts for his hands as well as the Infinity Gauntlet. This one's available through your favorite retailer and won't be available at San Diego Comic-Con.

Matt Riddle Explains Why He Keeps Calling out Brock Lesnar