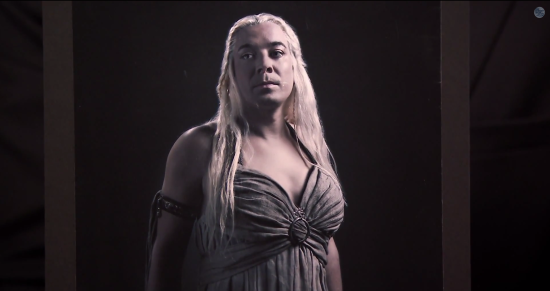 Clarke told the story of her audition for the role of Daenerys Targaryan, which ended with her “doing a dance” for David Benioff. Its way less creepy than it sounds.

The most unfortunate part, according to Jimmy Fallon, was that she actually lost the part at first…to Jimmy Fallon. Fallon then pulls out a photo of himself fully dress as Daenerys Targaryan. You won’t forget that one for a while.

Lastly, Clarke introduced a clip from Game of Thrones Season 4. The clip gives us our first look at the new actor playing Daario Naharis, Michiel Huisman, who is in a contest with Grey Worm.

Game of Thrones' Emilia Clarke On The Tonight Show, Shows Clip From Season 4