The first Mickey Rourke as Whiplash picture hit the internet a couple of days ago, and it appears to have created a great amount of controversy and panic. First, the pic, in case you haven't seen it. 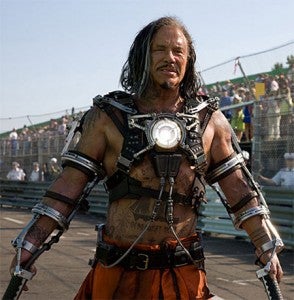 Now, the criticism. First, from io9:

He looks like an old-school He-Man action figure...There is nothing threatening about the way he looks at all

While the comment is incredibly hilarious (so was the accompanying action figure pic), I have a feeling that we're not seeing the finished product in that shot. Favreau isn't an idiot--he's done a hell of a job promoting this 2nd film. Sending out an early version of Rourke in costume was bound to get the masses riled up. And that's what he wanted. A couple of months from now, we'll see a more established costume and we'll all breathe a sigh of relief. Over at Splashpage, Rick Marshall wonders if the mash up approach of Rourke's character (a mix of Crimson Dynamo and Whiplash) is such a good idea.

By blending two established characters in the Marvel Comics universe (or more, given the similarities to Wolverine villain Omega Red in the look Rourke is sporting for the character, as well as his weapons’ resemblance to those of another Marvel villain, Constrictor) and creating an entirely new, mash-up character, “Iron Man 2” director Jon Favreau is treading where few filmmakers have gone before — and even fewer have traveled successfully.

Regarding this point, I somewhat concur. Mash ups have failed more than they have succeeded. However, I'm going to do something that I swore I'd never do after 'Watchmen': trust the director. Favreau put out a fantastic product with 'Iron Man' (heck, my mother in law watched it twice and she doesn't even like movies like that). He's marketed 'Iron Man 2' well, and the cast is even more solid than the original. So far, he's given fans ZERO reason to doubt him. So I'm gong to blindly trust Favreau and hope that he doesn't burn me. I think we all owe him at least that much.