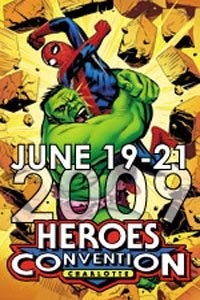 , put on by Charlotte, North Carolina based comic book store Heroes Aren't Hard to Find, kicks off its 2009 event today, June 19th at the Charlotte Convention Center. This annual event has several prominent guests, panels and suggestions of big news in store for attendees this weekend. The guest list, which was still expanding as late as Wednesday of this week, includes some of the hottest and biggest names in the comic book industry. Marvel's Ed Brubaker, gaining more and more in recognition for his work on Captain America, Chris Claremont, of X-Men fame, and Brian Michael Bendis will all be speaking at panel discussions, promising major announcements and news from upcoming storylines. DC will also be in attendance, with Brian Cunningham, DC editor, and Ian Sattler, story editor, promising major news surrounding the upcoming Blackest Night story involving the Green Lanterns. Boom! Studios, fresh off their recent success with The Muppet Show comic book, returns to the convention this year with some of their powerful talent in tow! Also a major feature of the convention will be Indie Island, a space dedicated to the smaller and independent press of the comic book world, where dozens of creators and artists will be in person to talk about their work and their place in the industry. Couple that with quick draw contests, tons of comic book dealers and artists signings, and Heroes Con 2009 promises to be huge! It runs from Friday, June 19th through Sunday, June 21st, so bring the family to this fun, expressive show, one of the biggest in the nation! Comicbook.com will be on the scene this weekend bringing you breaking news, interviews and other happenings from the floor of the convention. Check back with us frequently, as you never know what we'll have to show you or report!