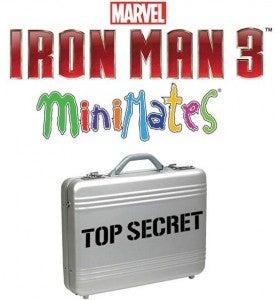 has a couple of Iron Man 3 spoilers by way of a toy description, which is often how these things break. The description for Iron Man 3 Minimates has been released, including details on some of the characters.

Update: Diamond Select Toys has issued a correction on the figure descriptions, revised description below.

The Iron Man 3 Minimates assortment will include Iron Man with the Mandarin, Iron Patriot with Top Secret figure and two specialty-exclusive sets, War Machine and Maya Hansen and Aldrich Killian with Cowboy Tony Stark. While it’s been previously rumored that Iron Man would jump to wearing Mark 47 armor in Iron Man 3, the revised toy description no longer specifies the type of armor.

The inclusion of Top Secret figure, Maya Hansen, and Aldrich Killian also confirm the long-standing rumors of the Extremis storyline. However, the most interesting figure might be Cowboy Tony Stark. We’re betting this means that Tony Stark puts on a cowboy hat and goes in a country and western bar at some point in the movie. Earlier this year, Comicbook.com took some exclusive photos of the Iron Man 3 set in Rose Hill, North Carolina. The set included a bar and also signs that indicated part of Iron Man 3 would be set in Tennessee.