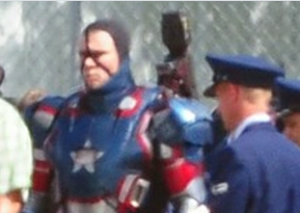 For the last couple of weeks, we (as well as most of the rest of the comics Internet) have been speculating wildly based on set photos taken of a man presumed to be Iron Man 3 villain James Badge Dale in a suit of Tony Stark's "Iron Patriot" armor from the comic books, but now Latino Review is reporting that it's all just a simple misunderstanding.

"It’s not a movie star, it’s just a white guy," the site says. Apparently, the man who's been widely reported as James Badge Dale is actually a stunt double for  Don Cheadle, who plays Jim Rhodes/War Machine in the Iron Man films. The report suggests that the Iron Patriot look is just a slick paint job slapped on the armor Rhodes appropriated for the Army in Iron Man 2.

The scene being filmed that day apparently revolved around the Vice President arriving on Air Force Two, where Rhodes is waiting as a protection detail, possibly against metahuman or alien threats in the wake of the events of The Avengers. Cheadle was reportedly on-set that day, as well, but didn't attract nearly as much attention as the fake Badge Dale, becuase he wasn't wearing fancy armor.