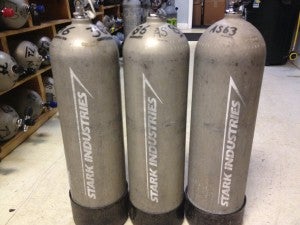 Apparently Iron Man 3 needed to use a dive shop in the course of shooting, and when a Wilmington, North Carolina-area dive shop provided them with the facilities, Marvel Studios reciprocated with these--a batch of SCUBA tanks emblazoned with the Stark Industries logo.

(And then, as with all things, someone uploaded it to Reddit.)

It's probably pretty unlikely that Tony Stark going into SCUBA gear is a major plot point in the film; rather, it seems sensible to assume they just wanted to give something cool back to the shop and had the stencil on-hand. Still, it's a neat gift and if they turn out to be screen-used props, even cooler.

I'm not 100% sure that I would actually use the tanks, personally, but they make a cool decoration for the shop!