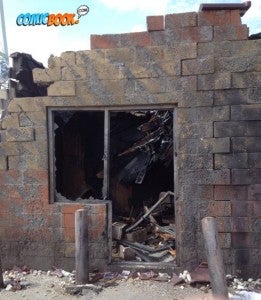 Iron Man 3 has been filming in Wilmington, North Carolina for the last several months. Comicbook.com has been bringing you exclusive photos and scoop from the set, and a recent article in a Wilmington newspaper has dropped some major new spoilers about Iron Man 3.

In a report on StarNewsOnline.com, the owner of a company involved in restoring furniture for Iron Man 3 reveals some of the work that he did. According to the report, the restoration company “upholstered about 22 theater seats that will be digitally replicated to create an entire theater on-screen. The theater will then appear to have been bombed during a terrorist attack in Afghanistan.”

The spoiler is kind of surprising, considering that movie studios have been very sensitive of late to any scenes that involve attacks on movie theaters, given the Aurora shootings that occurred during a screening of The Dark Knight Rises. Warner Bros. reshot Ganger Squad to remove a scene where gunmen open fire on an audience in a movie theater.

In another spoiler, the manager of a storage trailer company revealed that Iron Man 3 used their storage trailers for various reasons. Sometimes the trailers were used as a green screen backdrop, but they were also used in Rose Hill for a scene which involved spilling hundreds of gallons of water onto the set. As previously reported by Comicbook.com, our sources in Rose Hill told us that one scene involved the town's water tower. Initially, it was believed that the town's water tower might be toppled, but later reports suggested that a hole was just punched into it, allowing the water to spill out.