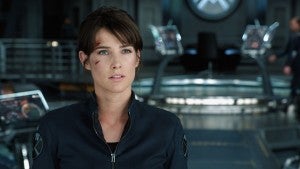 In a new interview with Vulture, Marvel's The Avengers director Joss Whedon discussed a number of issues, including the decision to cut scenes with actresses Ashley Johnson (who plays the waitress Captain America saves during the final battle) and Cobie Smulders (Maria Hill) from the final version of the film. While the Smulders stuff is pretty standard Hollywood stuff (cut for time and audience reaction), Whedon told the site that all of it was harder to let go than you might imagine.

"I hated cutting the Captain America stuff with the waitress," said Whedon. "At least I was able to call Ashley Johnson and tell her that all her stuff was still in Much Ado About Nothing, since she had been cut out of Dollhouse, she had been cut out of The Avengers: 'I swear you’re still in the Shakespeare movie!' You know, those bits had seemed very personal to me, and part of doing Much Ado was that I could go back to The Avengers and say, 'Oh, it’s not about me. Even though its my film, it’s about the Avengers. I am less important than the needs of the film'."

Maria Hill had once been featured in a framing device at the beginning and end of the film, and when Whedon made the decision to cut that, he seems to suggest that while the Smulders got it right, the concept Whedon was going for with the scene just wasn't working.

"One: The movie was three hours long. Two: Audiences didn't respond to it as well in the movie as I think they would as a DVD extra," the director explained. "Most of them didn't know who this character was or what the context was, and they were like, 'Uhhh, I don't know why I'm supposed to be personally involved in this character I don't know.' The rollout to the Avengers getting to Loki was so gradual that people were getting restless. I thought Cobie nailed it, and the reason I thought it was necessary is because I was trying to make a war movie and I wanted to give context that something bad had happened in the past. In a war movie, you don't know who's going to live or die, but you do know that this war happened and that [the characters] are going to be in a dire circumstance, and I wanted to create that atmosphere."

We'll see exactly how well he accomplished that atmosphere, one supposes, when the DVD comes out in a few weeks. Meanwhile, if you're interested, you can check out the cut scene featuring Ashley Johnson here.