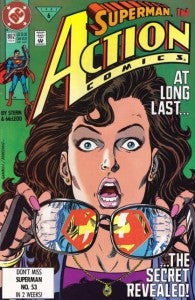 For decades, DC Comics fostered a love triangle between Lois Lane, Clark Kent and Superman that served as the centerpiece not just for a lot of Superman stories but for almost every tale told in the long-running series Superman's Girl Friend Lois Lane.

It wasn't until 1991--after the character had been around for more than fifty years in the comics, and more than five years after John Byrne's reboot of the characters in The Man of Steel--that Lois learned that she was, in fact, engaged to Superman without knowing it--and even then, she had to be not only told by Clark but then convinced it was true.

Of course, Lois knows who Clark is before he ever even puts on the tights in Man of Steel, this summer's blockbuster reboot of the character's film franchise. And the film's star, Henry Cavill, told io9 that he wouldn't have it any other way.

"I think it's essential," Cavill said of Lois's discovery. "Because if we're trying to base it reality, there's no way that Lois has these direct interactions with Superman, and then doesn't recognize Clark sitting next to her in the office. If she falls in love with Superman, and she's ignoring a guy who looks just like Superman, behaves just like him, and has the same kind of mannerisms and behavior, then what does that say about Lois? I like this relationship. She saves him just as much as he saves her."

During the interview, featuring video taken at a party the night before Warner Bros. announced that the Man of Steel sequel will feature Batman, he also discusses the idea of Superman "coming into his own" and becoming more confident, heroic and inspirational in the second film.

Man of Steel Star Cavill: It's "Essential" That Lois Know the Secret