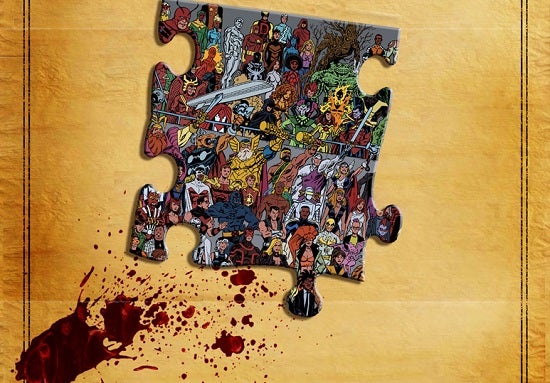 Marvel is apparently planning a wedding in April 2014--and in typical superhero-wedding fashion, it won't go off without a hitch. In fact, this one looks downright dangerous. Newsarama got the first piece of a puzzle--filename is "invitation_2"--earlier today. Whether they'll have pieces rolling out through the week or whether multiple news outlets will each get one today (or this week, for that matter) is something we'll have to wait to find out; Marvel has gone either way in the past. 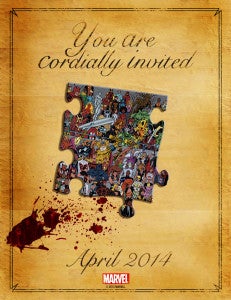 The identity of the happy couple isn't yet clear--although once there are more pieces, certainly we can start making some guesses based on who is or is not in the audience. The presence of Odin and Beta Ray Bill might suggest a Thor cast member--perhaps Loki, who is getting his own series soon?--but there are a lot of characters here, and not all of them have an immediate tie to the Norse gods. Marvel, who have made almost as much a habit as DC of breaking up their married characters, hasn't seen any major characters get hitched since the high profile wedding of Northstar and his boyfriend Kyle in Astonishing X-Men in 2012.