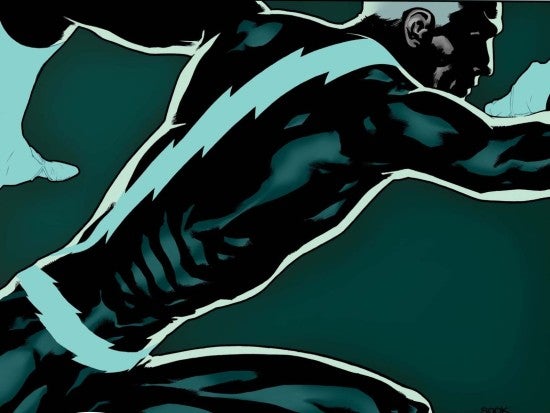 Despite showing up in two movies within about eighteen months of one another, Marvel Studios President Kevin Feige seems pretty confident that fans won't be confusing the X-Men: Days of Future Past version of Quicksilver with the one appearing in Avengers: Age of Ultron anytime soon.

Arguably more interesting than that point, though, is that according to the studio executive, there are a handful of characters who are in the same situation as Quicksilver and could show up in franchise films at more than one studio.

"There are only a handful of characters that occupy that middle ground," Feige told the New York Daily News (via CBM). "Iron Man is not going to show up over there and Magneto is not going to show up over here. But there are a few gray points even after many years of negotiations … and that only happens with a character like Quicksilver, who has been a part of the X-Men, the son of Magneto in those comics, but also a primary Avenger. The characters are going to be very different. Other than their powers, general audiences might not even know — unless they read your article — that the two are related."

While some fans had supposed that it was really only Quicksilver and Scarlet Witch who fell into this category, others thought there could potentially be a number of characters--such as The Skrulls, for instance, who are mostly associated with the Fantastic Four but have also been more general Marvel Universe threats over the years--who could show up in different places around the cinematic universes.

Certainly the idea that there are "a handful" of such characters might send fans back to the earliest issues of X-Men and Fantastic Four comics to see who was introduced there before they became major players elsewhere.

That bit about there having been "many years of negotiations" is also interesting--one almost wonders if that may be part of what brings comic book veteran Mark Millar to Fox. After all, he would be a strong candidate for somebody with both a film background and the arcane comics knowledge to help the studio determine what Marvel characters they might have a claim on for future X-Men and Fantastic Four movies.

Marvel's Feige: Quicksilver One of a "Handful" Of Characters Who Could Show Up at Fox