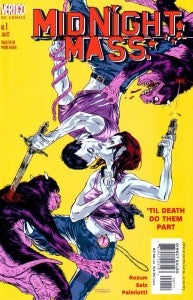 --a 2002 Vertigo series by Static Shock's John Rozum--will be adapted for television by NBC, according to a new report at Deadline.

The series featured art by Jesus Saiz and Jimmy Palmiotti, and revolved around Adam and Julia Kadmon, world-famous paranormal investigators based out of the titular town of Midnight, Massachusetts. A follow-up miniseries, titled Midnight, Mass: Here There Be Monsters, was released in 2004 with art by Paul Lee.

The project is to be written by Evan Daugherty, co-writer of this summer's box office hit Snow White and the Huntsman, and produced by Gerber Pictures. Rozum will be involved with the show in an advisory role.

Their project was reportedly being developed by NBC in 2009, when another writing team wrote a script that never made it to pilot.

Midnight, Mass Optioned as a TV Series at NBC