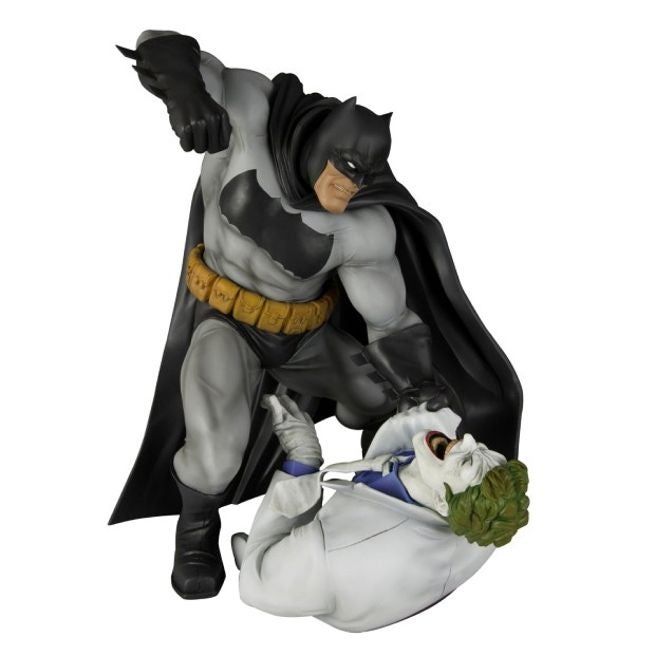 During a new Fat Man of Batman podcast, Kevin Smith asked legendary artist Neal Adams for his feedback on the Batman costume in Tim Burton’s Batman movies. Adams said, “I don’t like it. I don’t like any of them yet.”

Smith then started sharing details on Ben Affleck’s Batman costume. While most of the details are nothing that fans haven’t guessed from the monochrome Batman photo that was released, his comments do provide some clarification on the colors and the material used in the costume.

Smith pointed to a statue of Frank Miller’s Batman. Smith said, “They’re doing that one for the next movie. Like he looks like that.” Since it was a podcast, video of what statue looked like was not available. However, based on previous comments by Smith, it’s very likely the statue in question was the one we’ve pictured above that was based on a scene in The Dark Knight Returns: Hunt The Dark Knight.

When Adams brought up a fan film where Batman fought the Predator and wore a cloth suit, Smith said, “I tell you, that’s what they’re doing in this new movie Batman movie. It’s him in material. None of this body armor s***.” We've embedded the video below, so fans can get an idea of how Ben Affleck's Batman costume will look like on film.

Smith also added, “And when he wears the cloth suit, you know what’s going to happen? They’re going to make that much more money, because everyone’s going to be like, ‘Did you see the f***ing cloth suit at work, and it works.”

Batman V. Superman: Dawn Of Justice is scheduled to be released in movie theaters on May 6, 2016.