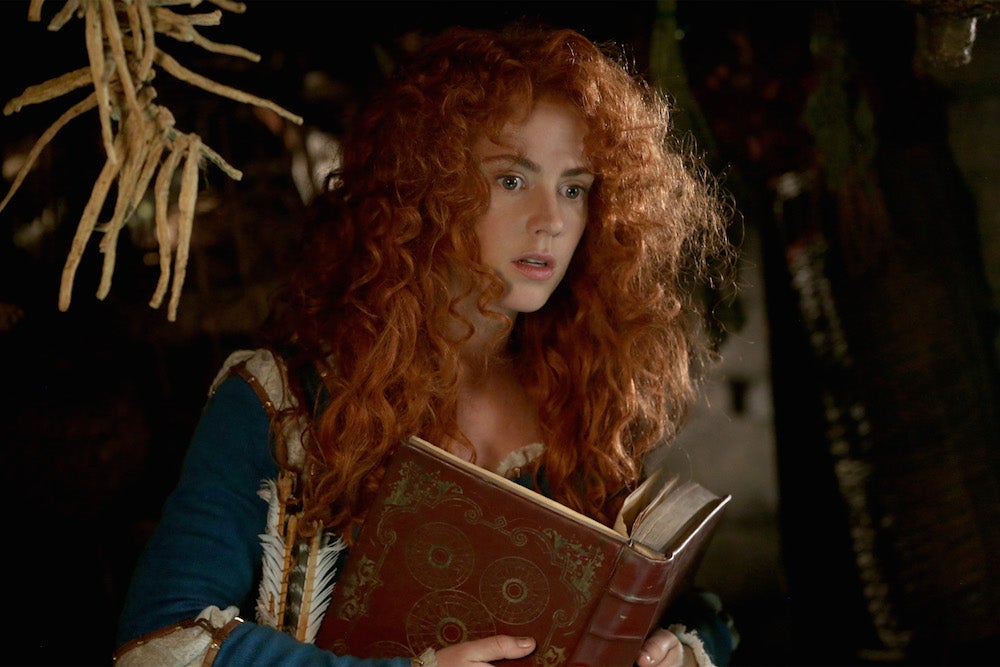 “The Bear and the Bow” begins in the Camelot flashback with Charming (Josh Dallas), Hook (Colin O'Donoghue), and Belle (Emilie de Ravin) following Merlin into Arthur’s dungeon to free Lancelot. While there, Merlin (Elliot Knight) uses a spell from one of Belle’s books to free Merida (Amy Manson) as well, though she initially doesn’t want to leave the wisps she needs to save her brothers.

As they are walking away from the dungeon, Merida steers Belle away from the rest of the group and knocks her out. When Belle wakes up, she finds herself in a boat, far away, with Merida. She knocked her out to force her help in finding the wisps and freeing her brothers. Belle thinks knocking her out was an unconventional way to ask for help, but she agrees.

In the present – Hook, Charming, Snow (Ginnifer Goodwin), and Regina plan to use the crimson crown to contact Merlin. Belle thinks they should ask Rumple (Robert Carlyle) for help instead, but the others aren’t yet ready to forgive. Elsewhere, Rumple breaks Belle’s teacup and uses a shard of it to saw through his binds and escape. Later, Merida returns to his location with Emma (Jennifer Morrison) to find him gone. Merida’s heart in hand – Emma demands that she find and attempt to kill Belle, forcing Rumple to be a hero.

Next, Emma visits Zelena (Rebecca Mader) in her jail cell, using her dark magic to briefly free her for a meeting, accompanied by much-wanted onion rings from Granny’s. Emma needs her help, in exchange for her freedom. Zelena taunts her in return, saying that Henry will never forgive her and declining the offered deal. Then, Regina and the others agree to let Arthur use the crimson crown to contact Merlin on his own, but once they’ve left the room, all he does is throw it into the fire.

Back in the flashback, Merida and Belle break into a witch’s home to use her magic cauldron. In the smoke produced from the cauldron, they see Merida’s kidnapped brothers and a man announcing their execution that very night. Merida declares that she will need Belle’s help to change their fate with the spell of Mor’du, which will turn her into a bear. 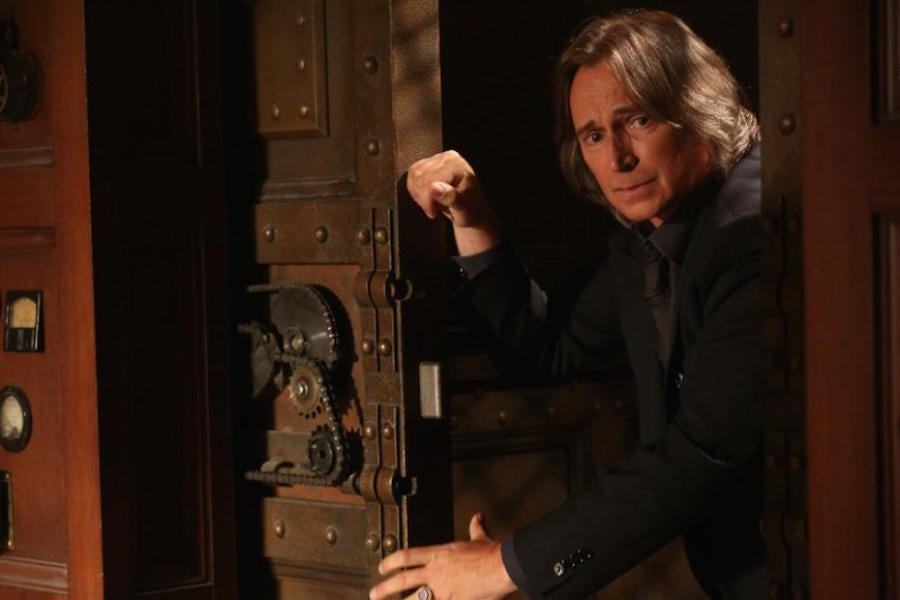 They arrive at the village where Merida’s brothers and being held, and Merida admits that her archery abilities falter under pressure, which inadvertently caused her father’s death. For this reason, she is convinced that the only way to save her brothers is with magic, not arrows. Merida storms into the enemy camp and drinks the potion that should turn her into a bear, but nothing happens. Belle admits that she switched it with water, believing that Merida must defeat them as a queen, not with magic. The leader and his men shoot three arrows at Merida’s brothers, which she stops with a single arrow herself, earning the respect of the rebel group.

In the present again – shortly after Rumple’s escape – Belle finds him and they reunite tearfully. He admits that while he was in a coma, he was ready to give up. The only thing that kept him alive was her voice. He then quickly realizes that Emma must have allowed him to escape, and that she would force him to protect Belle somehow. They decide to go back to the pawnshop where he believes there is enough magic to help them, after Belle coaxes cowardly Rumple.

Merida finds Belle and Rumple almost immediately at the shop, with the determined intent to kill Belle. She’s just about to shoot Belle, when Belle pulls out the rug from underneath her, knocking Merida out. Rumple tries to take Belle across the Storybrooke borderline, where he thinks they will be safe. She refuses and gets out of the car. Rumple reveals that he crippled himself to get out of the Ogre War, claiming that he will never be a hero – so Belle leaves.

Belle’s walk back to town is stopped by Merida, who has just become a much more dangerous foe – after drinking the potion that enacts the spell of Mor’du and turning into an enormous bear. She chases Belle through the forest, until they are joined by Rumple, who can hardly walk but is ready to die for Belle. He suddenly remembers the magic powder he has on hand, which he was going to use to get him and Belle over the Storybrooke line, and he turns Merida back into her human form.

Again in the present – Merida, Rumple, and Belle meet with Emma at the stone, where Rumple proposes a deal. He will pull Excalibur from the stone, if she frees Merida and tells her what’s happened to her brothers. Emma agrees, giving back Merida’s heart and admitting that the brothers are safe and sound. Before Rumple attempts to remove the sword, he apologies to Belle for not being a better man for her. Then, Rumplestiltskin swiftly removes the sword from the stone and gives it to Emma.

Later, Charming finds the burnt crimson crown, revealing Arthur’s lie. Regina remembers that there is one other person who may be able to reach Merlin, having spoken to him before: Henry (Jared Gilmore). Henry arrives, drops the crimson crown into Regina’s concocted magic brew and some sort of pre-recorded message from Merlin appears in the smoke. “There is only one person who can help destroy the Dark One now, Nimue,” he says. Before he can explain more about what to do, he is interrupted by the Dark One, and his “message” ends.

Once Upon A Time Season 5 Episode 6 Recap With Spoilers: The Bear and the Bow