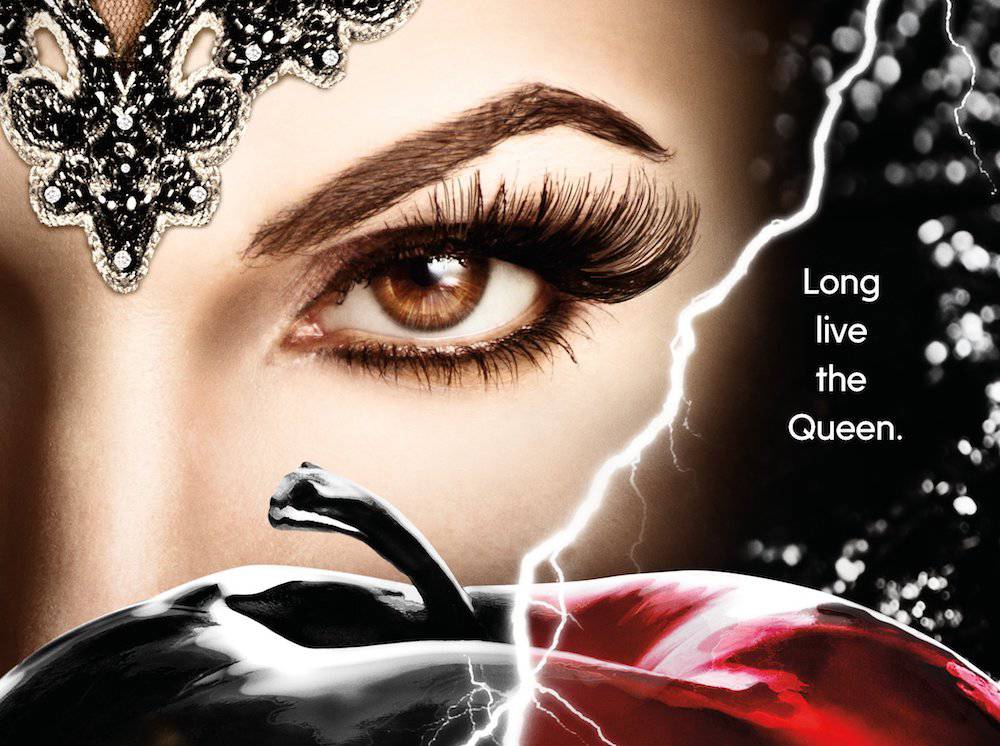 The winter finale episode begins with Regina (Lana Parrilla) taking Emma (Jennifer Morrison) and Hook (Colin O'Donoghue) to her vault, searching for a way to destroy the Evil Queen – whom they find at Robin Hood's grave.

When Emma lashes out with the sword from her visions, slashing the Evil Queen's cheek, our previous understanding that the Evil Queen cannot be hurt without also hurting Regina is shattered.

Then, after the Evil Queen poofs away, Rumplestiltskin (Robert Carlyle) finds her. He puts a golden cuff on her arm, so she will never be able to escape him. Even if Emma cannot kill her, Rumple vows to finish the job.

Believing that the Evil Queen can be killed with the mysterious sword – while Regina remains unscathed – Emma and the others go after her, falling right into a trap. They find Jasmine (Karen David) bound to a chair. The Evil Queen emerges, summoning her genie: Aladdin (Deniz Akdeniz). For her first wish, she wishes that Emma no longer be the savior. Emma magically disappears.

Suddenly, we see Emma as a princess in the future, celebrating her birthday with the whole kingdom, including her parents and Henry (Jared Gilmore). She asks Snow (Ginnifer Goodwin) and David (Josh Dallas) about the mysterious sword and gives it to Henry, who is about to be knighted.

Back in present day Storybrooke, Regina tracks down the Evil Queen, finding her in their office, where Aladdin is serving drinks. Fortunately – since they are the same person – Regina can make use of Aladdin, too. She asks to be sent to the same place as Emma, finding herself in a forest with the Seven Dwarves. Unfortunately, they still believe her to be evil and flee.

Regina strolls through the forest and finds a monument to Snow and David, marking the location where they "defeated the Evil Queen." She then finds Princess Emma, who is terrified of her. Before Regina can explain, Snow and David appear, and Regina escapes before they slay her.

Post-escape, Regina is unpleasantly surprised to find that Rumple still exists in this parallel world, though he is imprisoned, calling her his "greatest student and failure." He offers her a deal, in true Rumple fashion, offering information in exchange for his freedom.

Rumple says that Emma's savior-hood can be awakened, if Regina reveals the darkness in her heart, requiring Emma to stop her. He also offers her a "magic bean" that should allow her return to Storybrooke when necessary, but she has to pick it up from him on the following day. Rumple convinces her to switch to traditional Evil Queen garb on the way out.

Again in Storybrooke, Rumple seeks out Belle (Emilie de Ravin), finding her fully recovered after her pregnancy, thanks to the fairies. Rumple believes that their son isn't safe, unable to find him a trace of him – anywhere – despite his magic. He even frees Belle of her cuff, proving that his concern is genuine and not some sort of hoax.

Meanwhile, a desperate David goes after the Evil Queen, sword in hand, pretending to start a fight. Having tricked the Evil Queen, David snatches the lamp instead and conjures Aladdin. Now, he answers to David, not the Evil Queen.

David wishes that "the Evil Queen gets exactly what she deserves," but in response – absolutely nothing happens. Apparently, she has already received what she deserves, making his wish a complete waste. Hook and the others appear just in time to save him, and the Evil Queen gets away. David then gives the lamp to Jasmine, so she and Aladdin may wish themselves to Agrabah.

We are then transported again to the Princess Emma world, where the whole town seems to be present at Henry's knighting ceremony. Regina shows up in the middle of the event, Evil Queen-style, trying to trigger Emma into becoming the savior. Regina disappears, taking Snow and David with her, leaving Henry with Emma, who must somehow save the day.

Later that day, Princess Emma goes to the Evil Queen/Regina with an offer – the key to their kingdom. Such cowardice is the opposite of what Regina was trying to inspire, so to raise the stakes, Regina rips out Snow and David's hearts, crushing them. Emma sobs, and Henry appears, ready to kill Regina. He throws his sword at her, and in that moment, Emma stops the sword in mid-air, returning entirely to her normal self.

In Storybrooke again, the Evil Queen is confronted by a robed, faceless figure – just like the one in Emma's dreams. The robed figure magically transforms the Evil Queen into a caged snake and walks away.

In the Princess Emma world, now-normal Emma and Regina meet with Rumple and get the magic bean, opening a portal to Storybrooke. Before they can hop back into their appropriate realm, they are held at arrow-point by Robin Hood (Sean Maguire). While Regina is transfixed by the sight of her very dead lover, the portal closes.

Finally, in the present day, Belle and Rumple visit Mother Superior in the convent, where she lies ill. She admits that the Black Fairy took their son. The theft of their son brings Belle and Rumple together – once again.

The episode ends when the robed figure walks through the door of Rumple's shop, revealing himself to be Rumple and Belle's son, Morpheus.

Once Upon a Time Season Season 6 Episode 10 Recap With Spoilers: Wish You Were Here