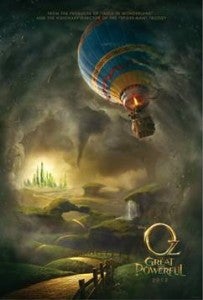 The concept of 'imagining' a story beyond what the original author has written has always fascinated me.  Whether it's a prequel or a sequel, when put in the right hands, an imagining can result in some pretty awesome storytelling.  Such appears to be the case with "Oz The Great And Powerful," which hits theaters next Spring.

Directed by Sam Raimi (Spider-Man Trilogy), "Oz" is a prequel to L. Frank Baum's character in "The Wizard of Oz.  James Franco plays circus magician Oscar Diggs, who is thrown (or flown) into the Land of Oz in a tornado.  With his abilities, Diggs thinks the beautiful, mystical land is his for the taking.  And the inhabitants of the Land have been waiting for Diggs.

However, three witches, Theodora (Mila Kunis), Evanora (Rachel Weisz) and Glinda (Michelle Williams) don't think that Diggs is the great wizard everyone has been expecting.  Oscar gets drawn into the conflicts facing the Land of Oz and must save things before it's too late.

Here is the trailer that debuted over the weekend at Comic-Con:

Oz The Great and Powerful Trailer From Comic-Con Hits Internet