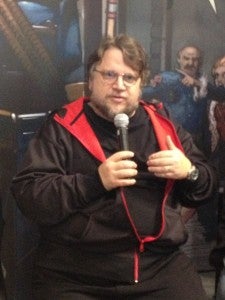 Guillermo del Toro, the director of the upcoming film Pacific Rim, announced at the New York Comic Con today that he is working with Legendary Comics to release a prequel comic to the film, which he says will evoke the feeling of World War II propaganda.

Del Toro told reporters at the Javits Center in Manhattan that he sees the prequel not as a spinoff or something derivative of the film, but of an expansion of the movie, and something just as important in its own right.

The Pacific Rim Graphic Novel is written by the film’s writer Travis Beacham (Clash of the Titans). According to Legendary Comics, "the graphic novel is written in three distinct parts – covering the in-world history from the first attack up to just before the movie.

Each part tells a complete episode of that history, dipping selectively in and out of character backstories and sometimes focusing on new characters who aren't necessarily in the movie. The idea is to expand the universe and explore how this war has affected not only our heroes, but the world beyond the film. That said, Stacker Pentecost's (Idris Elba) origin will figure into all three parts, tracking his journey to high-ranking commander."