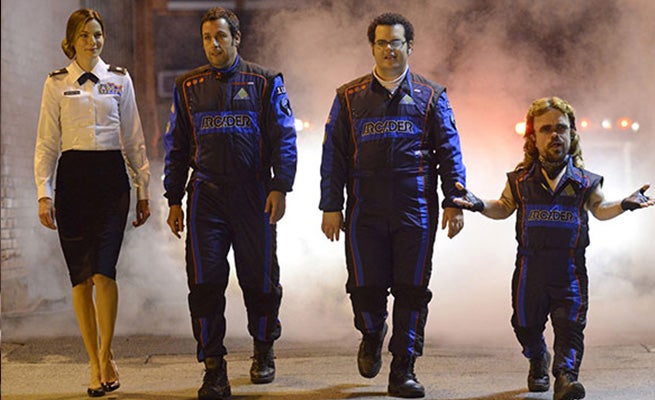 Earlier today, Sony Pictures Entertainment hosted an event at CinemaCon showcasing their 2015 line-up and beyond. Among the movies showcased, Pixels debuted a new trailer.

The trailer started out with footage of a time capsule being launched into space. The capsule was sent to be a message in the event that anything should happen to the human race. The message was, "taken the wrong way."

The arcade game characters have been brought to life and are attacking the Earth. Pixelated Centipedes come down from the sky. Josh Gad's yet unnamed character tells Adam Sandler's Sam Brenner that games are attacking. Sandler, Gad, Kevin James, and Peter Dinklage's characters are all 1982 World Champions - each at their own respective arcade game.

They shoot centipedes as they impede from the sky. Kevin James' Will Cooper, the president of the United States, shoots a Smurf and asks his buddies not to tell anyone. A car chase begins, with Pac Man as the attacker.

Sandler picks up the classic video game form Donkey Kong to attack DK in a real life version of the game he was worst at. The Pac Man creator tries to approach a gigantic, illuminated Pac Man and speak to it as his father, but has his hand bitten and turned to pixels. He runs off telling the team to attack Pac Man!

Rick And Morty: Characters That Will Be Recast Following Roiland Departure

The Crew 3 Reportedly Leaks Ahead of Imminent Reveal