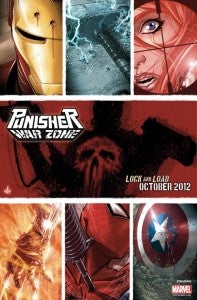 Capping a week of "This is War" trailers that many fans and most media (we admit it--Bleeding Cool made a strong argument and we were among the many who were taken in!) thought were related to Brian Michael Bendis' long-awaited Ultron War story, Marvel Comics today released a final image that collects all the previous teasers along with an image of The Punisher with a girl who looks like Hope Summers in his sights. Punisher War Zone, making its comeback after years out of print, appears to pit Frank Castle up against the heroes of the Marvel Universe in a way not entirely unlike the famous Punisher Kills the Marvel Universe what-if story that saw the gun-toting vigilante take out scores of Marvel characters. Why go with War Zone and not the more famous and long-running War Journal title? Perhaps spinning out of Avengers vs. X-Men, "War Zone" seems a more appropriate title for whatever is going on in the book. Maybe it's as simple as Greg Rucka (writer of Punisher) telling Marvel editorial as he did ComicBook.com that the idea of someone like Frank Castle actually putting pen to paper to record his crimes for posterity seems a little silly. That said, The Punisher has enjoyed an uneasy peace with the superheroes of the Marvel Universe for a long time; why would he attack this now? Maybe something in AvX pushes him over the edge and he feels the superhero community needs to be addressed, or maybe the teaser is a bit misleading. Presumably we'll see at the Amazing Spider-Man panel at San Diego Comic-Con International That they elected not only to revisit Punisher Kills the Marvel Universe as the series' apparent first arc but also to retain the series' original logo from the 1990s screams nostalgia, and hearkens back to a time when The Punisher was one of the most popular characters at Marvel Comics and had a number of titles, appearing effectively weekly even before you considered his many guest appearances.

John Cena Was a Proposed Member of WWE's Evolution Stable