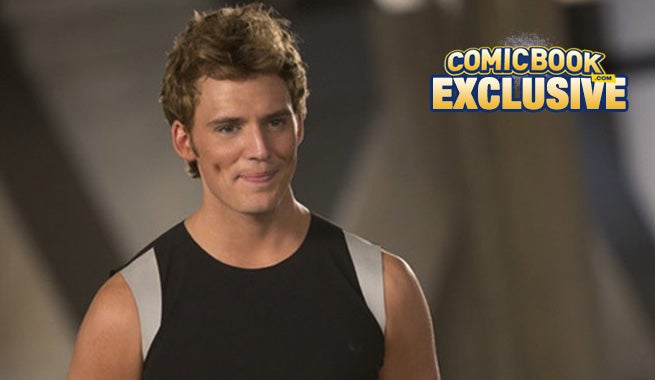 The concluding chapter of The Hunger Games hits theaters this weekend, forcing the cast members of the iconic franchise to say farewell to their characters for the last time.

Among those cast members is Sam Claflin, who plays Finnick in the saga. We had the chance to talk to Claflin for an exclusive interview about his experience with the franchise and what is like to have an epic action sequence in the series' conclusion.

CB: The Hunger Games, a franchise which you've been a part of for years now, is coming to end. How does it feel?

SC: On one hand, it's very sad to say goodbye to something you've grown so close to and a character that I've grown so attached to so seeing the back of all that will be very sad but at the same time it has been a huge part of my life and it's done not only amazing things for my career but other people's careers. It's gonna be enjoyable to see where we all go from here. It's nice to see everyone grow up and mature and learn as much as they have. These are memories we'll have forever and you can only hope to see down the line that you'll have an opportunity to do something like this again. But yeah it's been an awesome experience so I'm not ready to say goodbye quite yet.

At times, Finnick can be comic relief, but in the final chapter, you got to showcase one of the most epic action sequences. How much fun was that?

I think that specific moment, that scene, is what the last four years have been building towards. I read the books. I knew where Finnick's story ended and where it was heading. To me, it was a lot of hard work getting there and honestly, when we started filming Mockingjay Part 1 & 2, the only working out I was doing was that fight scene over and over and over and trying to be as prepared as possible. Truth be told, the stunt doubles, they bring it every single time. It's a real, real treat to be doing it with the best in the business. They allow you to hit them so I was genuinely hitting people and walking away feeling very great about myself. But yeah, it's amazing, it's what we, as men, do when we're growing up. We pretend we're sword fighters or cowboys and indians or whatever. When you're a kid, you get into that mindset where your imagination runs wild and I think to have this dream realized and to get to do it over and over and over again and then to watch it immortalized on screen is really a special thing.

From working on this entire franchise, do you have a favorite behind the scenes moment?

Of the entire franchise... Wow... You know, there was something really simple about working on Catching Fire and, generally, just filming in Hawaii. Me, Jen, Josh, everyone. We all just got along so well. Filming in Hawaii, with the fire and the jungle sequences and stuff, just being in Hawaii which I think is paradise anyway, with people you class as your friends and family anyway, it's amazing. We were fortunate enough that we would have time and opportunity to do the things we did out there like we got a yacht and we went out into the ocean and jumped off this boat. There's a house we all kind of hung around every weekend and go swimming and it was right on the beach and we'd go to the beach and we went kayaking and then we got back and had pizza. Every day was a special day. It's Hawaii. Hawaii does something to you, I'll tell ya!

After this you have The Hunstman: Winter's War coming up. You were in the first one, now returning for the sequel, can you say anything about the new film?

Honestly, I think it's probably quite safe to say that I'm not heavily featured in The Huntsman. I make an appearance. I was happy to be invited back and I was happy to be a part of it because the first one was so enjoyable to work on. I love Chris [Hemsworth] and Cedric [Nicolas-Troyan] who worked on the first one as second unit director, the fact that he's coming back to made walking on the set like home. I feel like I had been there and like no time had passed. It's amazing to see those guys again. The script is really solid and really exciting and I want the world to see it. Truth be told, I don't know how much I can talk about it because I wasn't heavily featured but it's got an amazing cast and amazing visual artists at the forefront, so it's exciting.

Over the summer, there was the big Power Rangers rumor flying around with your possible involvement stemming from a tweet. Was there ever any connection between you and the Power Rangers movie?

It's the scariest thing about social media. What happened was, I was in a gym in Prague, visiting my wife who was filming out there. I was in the gym and on the television, came the Power Rangers. Having grown up on the Power Rangers as a kid, I simply tweeted, "Go go Power Rangers." I didn't even know there was a movie being made and suddenly, I was being cast. There was no truth in any of it. I think I'll tweet James Bond next in the hope I get cast in that next.