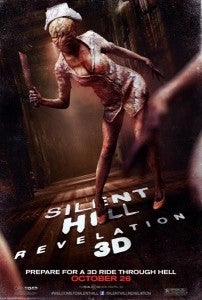 Well, Halloween is near and it’s that time of year for the horror movies to rear their demonic, horrific heads.  This week, we have the anticipated premiere of another video game adaptation in the form of Silent Hill Revelation written and directed by Michael J. Basset.  He doesn’t have a whole lot under his belt so far but does a very respectable job here.  Let me just say that this movie is definitely not for newcomers to the series.   Going with someone who had never played the games or seen the first movie, they pretty much declared they didn’t understand anything that was going on.  Judging by what I had seen, I could definitely understand the confusion.   Beware if you read on because there will be spoilers (albeit small) of both the games and movies.

The movie itself takes place years after the original.  We see that Sharon DeSilva and her father have become the newly moved and improved Harry and Heather Mason (names of the original protagonists of Silent Hill and Silent Hill 3 respectively).  It’s after a horrific and foreshadowing dream that we’re introduced to these two characters and the movie does a fine job of setting up what the viewers will be in for the for the next hour and half.  The story draws heavily from the plot of Silent Hill 3 but stays true to the mythology set forth in the original film; sometimes to its own detriment.

There’s a lot of history to this film and we are forced to go through almost four different types of exposition to fully flesh out the history and point of the film.  Sadly, only one of these is done well.  The first one, albeit brief, tells of how Sharon came back to the real world with a badly written and overly cheesy/sweet scene between Harry and his lost wife Rose played by Radha Mitchell, the actress from the original film.  How they handle this scene is perhaps the most disappointing because we only have a brief minute to explain why Rose is gone and Heather is back.  The reason is flimsy at best and it feels like the only reason she’s gone is because of the fans’ outcry from the original film about her being the main protagonist instead of the male “Harry”.  From there, we then have exposition in the form of a letter written to Heather from her father who then explains further to Vincent (while reading the convenient folder her father left) and then only two scenes later we have Vincent (whom I’ll discuss in a bit) explain even more.  But it’s with Dahlia Gillespie that we get the full gist of the story including scenes from the original film to help show us what all these people have been spouting out.  Honestly, they could have done away with all of the other scenes and simply had Dahlia tell the story as the actress Deborah Kara Unger puts her all into her small yet important scene and adds a sense of depth and sadness to the story.  Of course, afterwards she completely disappears and is never seen again.  Much like Rose.

In fact, one of my biggest complaints is how the characters were treated within the film.  Many people complained about the first film because of how they replaced the character of Harry Mason from the game with a woman.  True, I felt the same way until I accepted the fact that this wasn’t a horrible change.  In fact, the original film itself was basically an all-female cast until they were told to add men to it, thus entering Sean Bean.  Sadly, this need for “more men” carries over into the sequel and definitely doesn’t help.  They all fall into traditional “male” movie rolls:  Harry is an overprotective father (though he does have good reason) that would do anything to help his daughter and becomes the catalyst for Heather to go to Silent Hill; Vincent is the bad-cult-member-turned-good- boy who falls in love with Heather, and Douglas (a wasted and pointless character in this film) is simply a plot device to create catalyst to get things going.  None of these characters were interesting and in the end, they ultimately did nothing to help Heather do anything she couldn’t have done on her own.  Even the main antagonist Claudia Wolfe, a pivotal, strong character in the game is regulated to only two scenes where she is nothing more than a one note villain whose ultimate plan is a little unclear due to the contradicting reasons given throughout the film.

I believe it’s there that the true flaw of the movie is revealed.  In the games, especially the one this movie is based on, Heather is forced to fight the nightmare pretty much, on her own.  Yes, Douglas the detective is there occasionally for backup but in the end it’s her.  There is no father to rescue because spoiler, he dies, and Vincent is a strange figure of the Order that’s there to both help Heather on her way and taunt her all at the same time.  But all of this could have been forgiven if only the writer hadn’t added in the ridiculous plotline of Vincent falling in love with Heather in a mere 12 hours (at the most) of knowing her.  He basically turns his back on everything he was raised to believe all because he met her at school where she basically insulted everyone in the classroom (though they did have it coming).

Overall, there are three things that save this movie and the first is the actress Adelaide Clemens who plays Heather/Alessa.  Not only does she capture the physical looks of Heather Mason (and also looking like a young Michelle Williams) but she brings about an honesty to the character that seems to missing from everyone else.  Like her game counterpart, she's snarky and guarded though she still holds the essence of goodness that the original Alessa tried so hard to protect.    At Comic Con when she said that she did a lot of running she definitely wasn’t exaggerating as she did more running on screen then the actress in Run Lola Run.  But the best showcase of her ability is on the demonic carousel when she comes face-to-face with Dark Alessa, the embodiment of her anger and hatred.  She becomes a totally different person in both stature and tone, and shows that she isn’t just a one-note pretty actress.

But the ultimate thing that sets this movie apart from other adaptations are the sets and music used within.  The film is visually stunning, truly capturing the environment and feel of its video game counterpart.  From its rusted, burnt look to the simple cluttered, fog filled mess of a world, you truly believe the game you have been playing for years has moved into the real world.  From Lakeside Amusement Park to the depths of Brookhaven Asylum, you know exactly where you are and what to expect just by the familiar sense of walking through this places yourself with your controller.  To blend all of this together is the fabulous soundtrack composed by Akira Yamaoka, the composer for all of the Silent Hill games.  His familiar, haunting music immerse the viewer even deeper into the world they’ve come to know.  Another good thing is the lack of overuse of CGI.  At Comic Con they mentioned how they tried their best to use prosthetic makeup to create the monsters and they couldn't have done better.  Perhaps the part that best demonstrates that you don't need a computer to create convincing monsters is the scene with the fan-favorite nurses.  But when they do use CGI it sometimes has mix results (i.e. the fog scenes).

All in all, the movie is extremely good for what it is.  Unlike many adaptations, this game truly tries to meld the game with the story and does an overall great job unlike the Resident Evil films that have all but abandoned any pretense of coming from a game.  The plot at places is sticky and some of the characters are down-right irritating (I’m looking at you Vincent) but if you’re a fan of the games, you should definitely see this movie if only to see the locations, hear the music, and see and hear all of the Easter Eggs hidden throughout; especially the ending which echoes deeply of another game of the series.  Sadly, not the one we all want but if the movie does well perhaps we’ll be able to see a Mr. Sunderland make his way to the big screen as well.