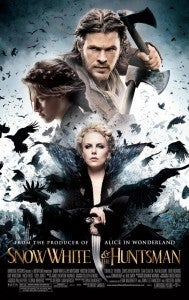 Snow White and the Huntsman

is on pace to make $56.1 million this weekend, breaking the slump the box office has been experiencing (The Avengers notwithstanding) for most of the season and topping Men in Black 3's three-day total from Friday through Sunday of last week.

The film, which stars Kristen Stewart and Chris Hemsworth, also passed the notable milestone of having an opening weekend that beat Mirror Mirror, the Julia Roberts-starring Snow White film that came out earlier this year. Snow White and the Huntsman is also less than ten million dollars away from overtaking the lifetime theatrical take of Mirror Mirror.

Men in Black 3 came in second at the box office this weekend with an estimated $28 million, slightly above the $26.2 million Box Office Mojo had predicted for the film, while The Avengers disappointed for the first time since its release, bringing in $19.8 million against a $21.5 million forecast. Those same estimates had predicted that Snow White and the Huntsman would make less than  $40 million this weekend.

Ridley Scott's Prometheus, which opens next week in the U.S., is beating Snow White and the Huntsman in the international market, though--particularly in the U.K., where it's tracking at 150% of Snow White's box office numbers. Early buzz on the movies has been strong, and while it's had a few scathing reviews, its overall score on Rotten Tomatoes is 80%.

Snow White and the Huntsman Slays Men in Black