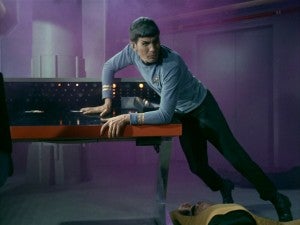 This weekend, Profiles in History will bring its Hollywood Auction to Los Angeles, and with it will come an opportunity for bidders to win items with some pretty impressive provenance.

Given the current Star Trek mania, arguably the most compelling item of the moment is a screen-worn Starfleet uniform from Star Trek (the original series), tailored for and worn by Leonard Nimoy as Spock.

There's plenty more, too: check out the official descriptions below:

Leonard Nimoy's “Spock” tunic from Star Trek: The Original Series. This velour science division Starfleet duty uniform tunic was worn by Leonard Nimoy as the mixed human-Vulcan first officer, “Mr. Spock”, in the second season of Star Trek: The Original Series. Never before has Profiles in History encountered such a prized wardrobe piece from the original series with such exceptional documentation. It is expected to fetch $80,000 - $120,000.

An original screen-used full-scale T-800 endoskeleton from Terminator 2: Judgment Day. This highly detailed and skillfully crafted piece was originally used in Terminator 2, but was given a new head and neck spinal section for computer-graphics reference in Terminator 3: Rise of the Machines. It is pictured above and expected to fetch $100,000 - $200,000.

A full Alien warrior creature costume from James Cameron's classic 1986 film, Aliens. It’s believed that only three full costumes survive, and this is the finest example. It is pictured right and expected to fetch $80,000 - $120,000.

A screen-used “Facehugger” alien from Aliens . This represents the first stage of reproduction of the alien race — a spider-like parasite that implants an embryo, which gestates and then bursts out of the host’s chest. Due to the nature of materials and production use, surviving examples are almost unheard of. This example was salvaged by a visual-effects technician after filming had wrapped at Pinewood Studios and subsequently kept stored on the glass bell jar that accompanies the piece today. It is expected to fetch $20,000 - $30,000. 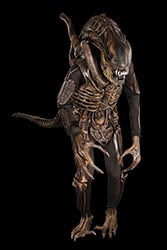 Jeff Bridges “Dude” robe from The Big Lebowski. Arguably the most iconic bathrobe in all of cinema history, “The Dude’s” ( Jeff Bridges) leisure-attire overcoat of sorts is the ultimate way to stay warm, comfortable and apathetic. It is expected to fetch $6,000 - $8,000.

Star Trek, Aliens and Terminator Among Items Up For Auction This Weekend