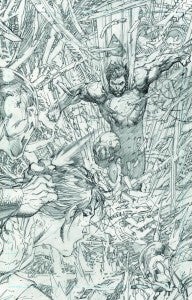 With a radical new status quo following the events of Forever Evil, both Superman Unchained and Nightwing will conclude in April, DC Comics's newly-released solicitations reveal. While artist Jim Lee had previously hinted that Superman Unchained might only last for one full arc, DC and writer Scott Snyder had tried their best to dance around that claim, complete with an implication that the series could possibly go on without Lee. According to recently-released sales numbers, Superman Unchained was one of DC's most impressive performers last year; after generating more than $1.25 million in revenue with its first issue, the second was the only non-event or non-#1 book included in the ten top single-issue sellers industry wide in 2013. Nightwing--whose identity was revealed to the world in Forever Evil #1--has been a key part of the storyline so far and his fate has been much-teased. Some fans are worried about his death, since he doesn't appear in the "Thanksgiving" spoiler that teases the post-Forever Evil Batman status quo, and since it's widely known that DC's co-publisher Dan DiDio wanted the character to die in Infinite Crisis. That seems like an awful lot of evidence pointing in the same story direction, though, and Geoff Johns typically likes to steer away from the obvious answer in such cases. 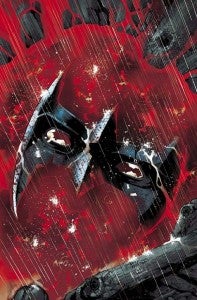 Even the bloody Nightwing mask on the ground is oddly reminiscent of an issue of 52 (on which Johns was a writer) that saw Booster Gold's bloody goggles on the cover, the character "die" inside and then a revelation a few weeks later that he had faked the whole thing. Last week, Nightwing writer Kyle Higgins--who took on the character as part of the New 52 relaunch and had been writing the series since the start of the new volume--announced to his fans that he would not be on the book anymore in April, but suggested that the title would simply have a new creative team. Bat-group utility infielder James Tynion IV is writing the series' final issue. You can check out the covers and solicitation text for the issues above and at right. NIGHTWING #30 Written by JAMES TYNION IV Art by MEGHAN HETRICK Cover by EDDY BARROWS 1:25 MAD Variant cover On sale APRIL 9 • 40 pg, FC, $3.99 US • RATED T • FINAL ISSUE The Bat Family is forced to face the brutal aftermath of FOREVER EVIL, but after everything they've been through, can they stand together? SUPERMAN UNCHAINED #9 Written by SCOTT SNYDER Art and wraparound cover by JIM LEE and SCOTT WILLIAMS Backup story art by DUSTIN NGUYEN 1:25 Variant wraparound cover by DAVID FINCH 1:50 Variant wraparound cover by BRYAN HITCH 1:100 B&W Variant wraparound cover by JIM LEE On sale APRIL 30 • 32 pg, FC, $3.99 US • RATED T Combo pack edition: $4.99 US • FINAL ISSUE This is it – the extraordinary finale of Scott Snyder and Jim Lee's Superman saga, surrounded by an epic wraparound cover! It's a battle in the sun as Superman and Wraith accept their destinies…and Lex Luthor pulls the trigger on his ultimate weapon! This issue is also offered as a combo pack edition with a redemption code for a digital download of this issue.