It's been a bit since Terry Moore joined ComicBook.com to do an issue-specific commentary track for Rachel Rising. With an every-six-weeks production schedule, the previous issue fell just before San Diego Comic Con International, where we discussed it, among other things, with Moore. Still, we didn't do our standard commentary track because, really, talking on the convention floor isn't conducive to intricate examination of a single issue. I know, right? Who would ever have thought it? The newest issue--Rachel Rising #19, which was released on Wednesday, saw Moore head back to the 1690s to explore Rachel's roots--and to bring readers a big surprise about one of the other supporting characters. No, not Lilith. Even in the 17th Century, she's pretty much like you'd expect her to be. What follows is a pretty spoiler-filled conversation, though, so if you haven't read the new issue yet, please go buy it so we can all be on the same page. Heck, I ask the questions in the order they occur to me as I read--so you can read along with us if you're so inclined! 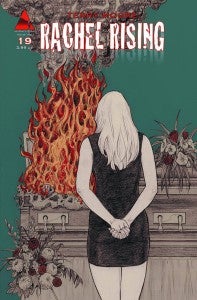 ComicBook.com: Man, do I love that cover! Is that supposed to be someone in particualr in that coffin or is it symbolic? Terry Moore: It's just some poor unlucky soul. I attended a couple of funerals this year, this vision struck me and seemed so Rachel. ComicBook.com: It's funny because every so often there's an issue that really reminds me how far afield this book is from much of what dominates the market. After having left us on the mother of all cliffhangers, what gave you the idea that NOW was the time to take us all way back in time? Moore: I like to build a story gradually, in layers, like a novelist. It gives you time to get your head in the story. I felt we'd laid enough groundwork for the past to begin some detailed looks. It's an important part of the present story, the stow times become linked and almost co-exist. You'll see as we move into the next issues. ComicBook.com: I have a terrible memory, so refresh me: Is this the first time we've heard "Rachel's" full name of Mary McKenna? Moore: Mary McKenna is the 1690's mother. Bryn Erin McKenna is the daughter who becomes Rachel 300 years later. This is the first time we've heard her name. ComicBook.com: You can certainly see why, later in the issue, there's this notion that maybe Lilith is just messing with people. After all, she takes great pains to make sure everyone knows she's done what she does. Moore: No regard for what the "little people" think. After a few millennia over watching generations come and go, I guess she's over it. ComicBook.com: Speaking of which--as we get into the Tree of Life stuff, will that give you an opportunity to explore some more of the Jewish mythology surrounding Lilith's name? Moore: It would, but I'm more interested in staying on target and painting word pictures of just how far back she goes. She was there for all of it. I'd love to sit and talk to her, ask her questions. ComicBook.com: Lilith kind of reminds me of Darcy Parker here, just in the way she carries herself, the way she gives people gifts they never asked for and then acts like they owe here, the fact that she goes from sweet to horrible very quickly--was that on purpose or is it just a matter of working within a kind of common character type? Moore: Lilith is a woman of great power. At times in her life she has been called "Your Highness". From her point of view, she's being very patient with the endless stream of temporary lives that come and go around her. She uses people like salt and pepper to season her life. ComicBook.com: What's that kinda spell-sounding thing that Lilith spouted out at Mary's mother? Google turned up nothing! Moore: It's rare to produce something that can't be Googled! My finest hour. Lilith was issuing a spell she learned in ancient Egypt. ComicBook.com: We really don't deal with the issue of Aunt Johnny here! Is there any hope for her? Moore: Read issue 20 to find out! ComicBook.com: That Jet is James brings a kind of homoerotic subtext to the relationships between some of these characters that wasn't there before, doesn't it? Moore: It would introduce that possibility, but I suggest reading issue 20 to find out more about what the "new rules" will be.

Terry Moore on Rachel Rising #19 and Next Issue's New Normal