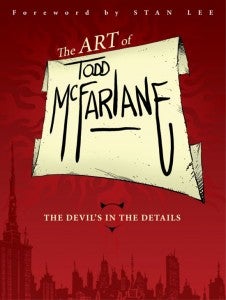 Here’s the description from the publishers: A visual biography celebrating almost 30 years of artwork from one of the comic industry’s most popular and iconic artist personalities, The Art of Todd McFarlane: The Devil’s in the Details, is not just another art book. It follows McFarlane’s journey from a young comic book fan mimicking his favorite artists, to his subsequent rise to comic book stardom. McFarlane, himself, provides hundreds of anecdotes throughout the 400-page book, walking the fans through his groundbreaking career.

“I broke into this industry when I was 23 years-old. The only way to put a book like this together is to have actually spent more than two decades creating the art within it,” said McFarlane.  “The passage of time allows you to build up a body of work, that as you step back, has meaning, and can be an inspiration for other artists along the way. I’m happy to be able to collect my autobiography in both a written and visual format. I hope the wait has been worth it!”

According to the publishers, “Fans will receive an up close and personal look at McFarlane’s creative take on beloved characters from both DC and Marvel Comics, and learn more about his history making move in helping to form Image Comics, where he published his brainchild, Spawn. With copious amounts of rarely seen black and white original pieces of his most famous work, and numerous drawings of the comic book industry’s most popular characters, this is a book that can’t be missed. In addition, fans get an exclusive peek at McFarlane’s first forays into various media (toys, film, animation, music videos, video games), where he put his creative stamp on everything through his signature eye-catching imagery.”

The Art of Todd McFarlane: The Devil’s in the Details will be an oversized hard cover book (9x12) and is limited to 5000 copies, with 700 signed and numbered editions available.  Each book retails at $64.99 and $100, respectively.

The Art of Todd McFarlane: The Devil’s in the Details Release Date Announced