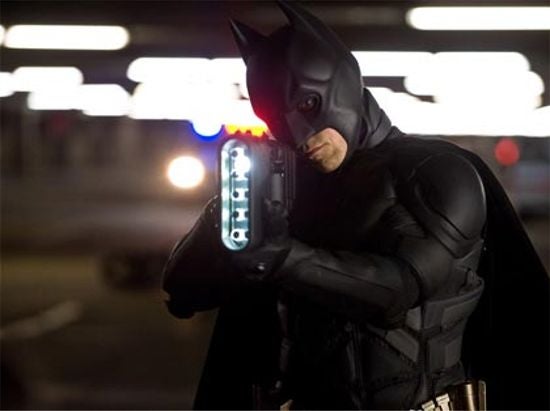 As we looked at this recently released Dark Kight Rises photo of Batman, like many of you, we were perplexed by exactly what he is holding. By the way Batman is pointing the object we would guess that it is some type of weapon, but it sure looks like a gigantic checkout lane barcode scanner.

One of the rumored plot elements of The Dark Knight Rises is that something similar to Occupy Wall Street might occur with the 99% revolting against the top 1%. Could it be that after Bane, Catwoman and their gang bring down Gotham’s wealthy that Batman has to take a job as a cashier at a local grocery store?

Sir, I’m done scanning your groceries. Can you please tell Robin if you would like paper or plastic? 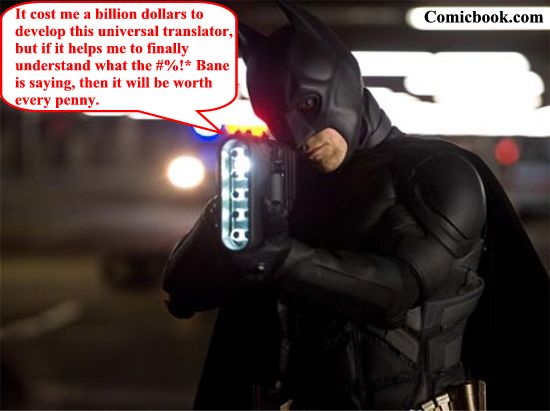 It cost me a billion dollars to develop this universal translator, but if it helps me to finally understand what the %@^! Bane is saying, then it will be worth every penny. 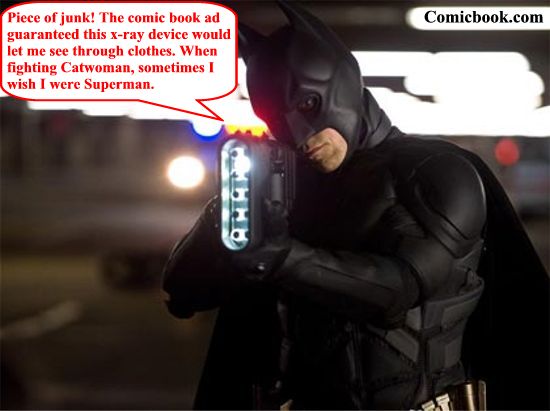 Piece of junk! The comic book ad guaranteed that this x-ray device would let me see through clothes. When fighting Catwoman, sometimes I wish I were Superman.

The Dark Knight Rises is scheduled to premiere in theaters on July 20, 2012. It stars Christian Bale as Batman, Anne Hathaway as Catwoman, Tom Hardy as Bane, Joseph Gordon-Levitt as John Blake, and Marion Cotillard as Miranda Tate. The Dark Knight Rises photo of Batman is by photographer Ron Phillips.