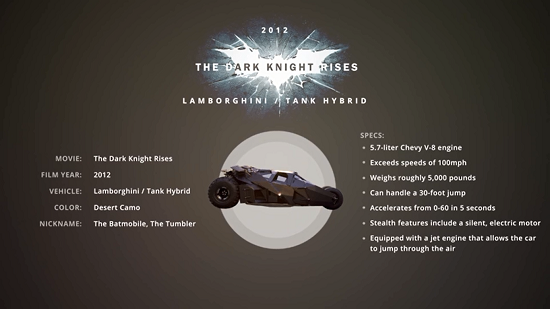 The Tumbler from Christopher Nolan's Dark Knight Trilogy joins Christine, Bullitt and a number of other famous movie cars in a cool new video that runs down the specs of "some of the greatest cars in the world," per the Mustang blog CJ Pony Parts.

You can check it out embedded below, along with a short description below that from the writer.

The Mustang from Transformers was included, as were cars from Pulp Fiction and Gone in 60 Seconds...notable absences? The sexy and heavily-marketed muscle car version of the Batmobile that Tim Burton used, and anything from The Fast and the Furious. Of course, at least the Burton cars weren't actually cars, per se...

"There’s no doubt about it; our love of cars will survive whatever economic downturns come our way," they write at the blog. 'This is, after all, just a small sampling of the cars that have been made famous by film throughout the years. It makes you wonder which of our modern-day automobiles will be film legends in the future."

Some of the greatest cars in the world were crafted specifically for a movie role. A great car can make or break a film. Here's a few of the best cars featured in movies. Sometimes, they are just as famous as the actors themselves.

The Dark Knight, Transformers and More Get a "Cult Classic Cars" Rundown