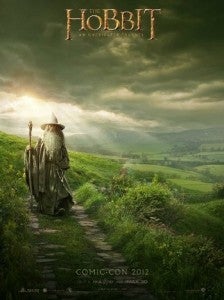 Peter Jackson took the stage at San Diego Comic-Con with a host of actors and his top staff yesterday.  And while the panel itself was interesting, the biggest surprises came from the 12 minutes of footage Jackson showed for the upcoming Hobbit films: "The Hobbit: An Unexpected Journey" and "The Hobbit: There and Back Again."

Here are the five things we know about the films so far:

These Films Will Be More Exciting Than the LOTR Trilogy: Sure, that's a bold statement.  But "The Hobbit" is the beginning of the story, and we get to see how little Bilbo Baggins becomes the person we meet in "The Lord of the Rings." The quest of Baggins, Gandalf, and the 13 Dwarves to steal treasure from the dragon Smaug is going to be a pure adrenaline rush.  And along the way, it's going teach us a heck of a lot about humanity.

Martin Freeman Nails It as Bilbo Baggins: As "The Hobbit" story takes place prior to the "Lord of the Rings," younger actors needed to be cast for some of the roles.  Freeman has the difficult task of living up to not only fan's expectations from the book, but Ian Holm's fantastic performances in the LOTR trilogy.  Based on the footage, Freeman has the character down pat.  And if he's really as good as we think, Freeman should see himself nominated for Best Actor next year at the Academy Awards.

Bilbo and Gollum Will Steal the Show: The wonderful Andy Serkis returns as Gollum.  In the footage screened at SDCC, Bilbo and Gollum play a riddle game (those of you who have read the book will know what I'm talking about).  The chemistry is OUTSTANDING.  Expect a lot of great things from scenes between those two, as we see Bilbo head down the dangerous path with the ring that Gollum has already taken.

These Films Won't Be Completely Faithful To The Book: As we saw with the LOTR trilogy, Jackson will take some liberties with the story.  It could be something minor to fit to the films (like moving the giant spider from the 2nd movie to the 3rd), or it might be something larger.  In this case, I think it's the latter. "The Hobbit," while a children's book, is more geared toward men than women.  And that fact wasn't escaped by Jackson and writer Phillipa Boyens. Boyens created an elven character named Tauriel (Evangeline Lily) to push some more female "energy."  Says Boyens: "We feel it's within the Tolkien spirit."  However, that being said...

Peter Jackson Will Make Two Phenomenal Movies: It's taken Jackson over a decade to adapt "The Hobbit," and he isn't going to screw it up.  These films are important to him.  And he gets it.  "This is a film made for fans by fans."  Sure, Jackson will change some things up.  But he knows the source material by heart.  And he knows which changes will make the story even better on the silver screen.  He did it three times previously, and he's going to do it again with these two films.