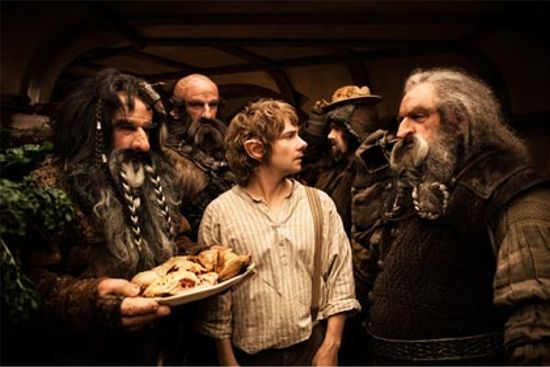 After The Hobbit: An Unexpected Journey had its world premiere in Wellington, New Zealand, some lucky attendees took to Twitter to express their opinions. As compiled by Comicbook.com, the initial Hobbit Twitter reviews were overwhelmingly positive describing the film as “excellent” and “perfection.”

Now, the press embargo has been officially lifted, and official longer reviews are starting to surface online. We’ve compiled some of the official reviews below. The reviews seem to be overall positive with just a little bit of criticism over the length of the film. Overall, everyone seems to love the visuals, some think the movie drags in the early parts, but apparently the ending is epic. Another common theme is that The Hobbit appears to be faithful to the books, which should please fans, but maybe not all critics.

The New York Daily News describes The Hobbit as eye popping. Ethan Sacks writes, “Lighter and funnier than its ‘Lord of the Rings’ predecessors, ‘The Hobbit: An Unexpected Journey’ remains faithful to the fantasy world last seen in the 2003 Academy Award-winning ‘The Lord of the Rings: The Return of the King.’”

Collider gives The Hobbit an “A-“, saying, “The Hobbit: An Unexpected Journey is a classic adventure quest in the making; packed with colorful characters, gorgeous settings and plenty of action, the only setbacks are technical ones.”

The Playlist gives The Hobbit a “B+”, saying “As epic, grandiose, and emotionally appealing as the previous pictures, 'The Hobbit' doesn’t move far from the mold, but it’s a thrilling ride that’s one of the most enjoyable, exciting and engaging tentpoles of the year.”

Cinema Blend notes the slow pace in the beginning but seems satisfied with the conclusion, saying, “And though The Hobbit feels in its first half very much like a brief story stretched far too thin, it eventually settles into its own enjoyable rhythm, a comic adventure that's a good enough excuse to make a return visit to Middle Earth.”

The Hollywood Reporter review credited the faithfulness of the adaptation, saying “There has almost certainly never been an adaptation of a novel more studiously, scrupulously and strenuously faithful as Peter Jackson's film of J.R.R. Tolkien's The Hobbit: An Unexpected Journey.” However, they also expressed some concerns over the pace of the movie, saying “In pure movie terms, however, it's also a bit of a slog, with an inordinate amount of exposition and lack of strong forward movement.”

Variety also praises the visuals but expresses concern over the length of the film, saying, “While Peter Jackson's prequel to ‘The Lord of the Rings’ delivers more of what made his earlier trilogy so compelling -- colorful characters on an epic quest amid stunning New Zealand scenery -- it doesn't offer nearly enough novelty to justify the three-film, nine-hour treatment, at least on the basis of this overlong first installment, dubbed ‘An Unexpected Journey.’”

TheOneRing.net also notes some things feeling misplaced early on in the film, but is pleased with the ending, saying, “To be honest, yes there are other bits that are a bit confusing and may feel misplaced, but I will want to watch it a second time before I pass final judgement on this film. I loved the ending, it is rather awesome.”

Slashfilm gives The Hobbit a "7 out of 10," saying, "Overall The Hobbit: An Unexpected Journey is a lot of fun. Fans of Jackson, Tolkien and the Lord of the Rings films will enjoy it. However, it’s long and uneven, which keeps it from reaching the heights of Jackson’s first three Middle-Earth films."