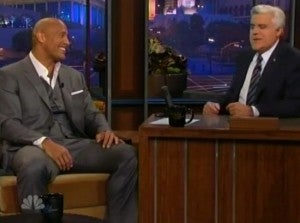 In an appearance on the Tonight Show to promote G.I. Joe: Retaliation, Jay Leno took an interest in a photo of Dwayne “The Rock” Johnson’s mom, and The Rock offered to set them up. The Rock also talked about his fondness for action figures when he was a kid. The Rock said, “I had a massive collection of G.I. Joes and Star Wars, that’s all I did.”

The Rock added, “And how I use to get them, because at that time we really couldn’t afford them, when I was eight, I would just go to the store and open them up in packages and put them in my pocket.”

Jay Leno interjected, “I think that’s called stealing.” The Rock laughed, “It’s called theft.” Actually, it’s called destroying the investment value of action figures. Didn’t The Rock know you’re supposed to leave them in the packages? Just think how much those Star Wars figures would be worth now if he had just shoved the whole package into his pockets.

It turns out the Rock’s mom was none to happy about his method of collecting. The Rock said, “I got caught a couple of times. And that sweet woman, who you’re getting ready to date, my mom, she would give me the whooping.”