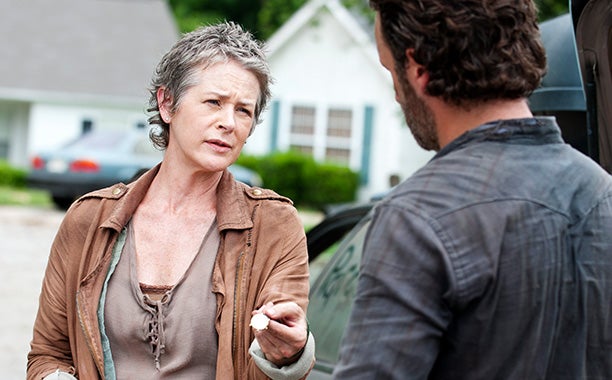 It's been a few weeks since we were at the prison with Rick Grimes and his merry band of survivors--but when we last saw them, Rick had exiled Carol, telling her she was no longer welcome at the prison after her "survive at any costs" mindset led her to murder and burn two members of the prison community whom she worried could cause an outbreak behind the walls.

There's been a fair amount of conversation leading up to this point about how Daryl--Carol's will-they-or-won't-they boyfriend--might handle the news when Rick finally delivers it, and somewhat less speculation (but still some) about when Carol, played  by Melissa McBride--might show up again.

I have a theory that it could be tonight. 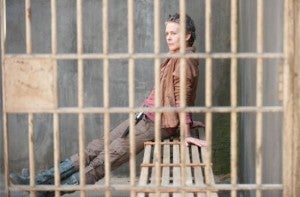 The Walking Dead is a series that, other than big confrontations like the ones with Shane or The Governor, has sometimes proven itself incapable of sitting on big storytelling opportunities, opting instead for paying many of their teases off right away. It keeps the characters moving forward at a brisk pace even when the plot itself is fairly stagnant, so it's hard to fault them too much for it. It does, however, lead me to believe Carol could play a major role in the midseason finale.

What role? Damned if I know.

There's this extra dangling thread of what seems to be another group out in the woods to consider: last week, The Governor and his group didn't attack that campsite, and when they returned to do so later, they found it abandoned, its inhabitants apparently killed and their supplies looted. It's pretty unlikely that Carol will have done that--even with a survival-at-all-costs ethos driving her this season, she would drift dangerously and immediately into The Governor's territory if it were revealed she killed a group of innocents just to take their stuff.  Rather, it seems more likely that whoever killed those people was from a third group entirely and that both Rick and The Governor might do well to look over their shoulder both during and after this week's episode.

The most likely scenario, if it's someone from the comics, is that the campers were taken out by The Hunters, a group of surivors who turned to murder and cannibalism to meet their needs as the zombie apocalypse raged on, leaving few supplies and making hunting and farming nearly impossible due to the volume of walkers. If that were the case, there are a few possibilities:

Carol could discover the nature of The Hunters and return to the prison to warn Rick about them.

This scenario would likely involve Carol finding The Governor and his men parked outside with a tank and hostages. New, badass, knife-wielding Carol might very well make a nuisance of herself to The Governor and his troops, taking out a couple of them before she herself dies.

Why would this work? Well, besides the obvious fact that Carol is out there...somewhere...and that a tank rumbling by would be hard to miss, therefore potentially putting her on the scene without The Governor's knowledge.

Furthermore, putting her in a position to endanger herself and potentially die to save her friends would make an interesting opposite side of Carol's "the only thing we can do is survive" conversations. The concept of living versus surviving is inherent to zombie fiction and other types of survival horror, and it's a theme that Kirkman, Gimple and company have delved into quite a bit this year in the form of Glenn and Maggie's conversations.

Carol could be caught by The Hunters and either used as food or leverage.

At one point shortly after Dale died, Robert Kirkman assured fans that his epic death scene--in which the cannibals capture him and amputate one of his legs for food, only to have him reveal that he had been infected and now they were all doomed--was still in the cards for...somebody. Kirkman had a character in mind. Could that be Carol? It wouldn't be totally out of sync with her portrayal this season, certainly.

If it was leverage they were going to use her for, it would have to be in the midseason premiere. This episode is going to be The Governor coming to Rick with hostages; having another group coming with another hostage would just be...well, silly. The whole episode would devolve into a Monty Python sketch. But that could be the big cliffhanger: as Rick and his remaining group make their way out of the prison following the big battle, Carol is captured by someone on the road.

Even if The Hunters aren't involved, that first bit still holds true. She could, for whatever reason, find her way to the prison either after or even before seeing The Governor's tank and ultimately prove herself a key factor in the showdown. The Hunters theory makes sense because it ties back to the events of The Governor's stand-alone episodes, but it's not strictly necessary.

The Walking Dead Midseason Finale: Why Carol Could Be Key